The Brancoazuis (The Blues and Whites) launched their 2015/16 home, away and third kits from Italian firm Lotto Sport over the summer. All three have been worn during the club’s extended pre-season campaign. They will be available at the UK Soccer Shop, Subside Sports and Kitbag La Liga stores.

The Deportivo de La Coruña 2015/16 home kit in in the famous blue and white stripes of the 2000 La Liga champions. It uses a modern Lotto kit design that features a Mandarin collar that opens to a loop at the front of the shirt. Its sleeves are blue with red cuffs. The Deportivo home uniform is completed by blue shorts and socks. 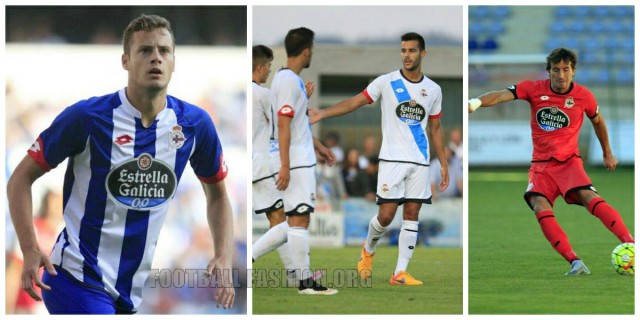 The Deportivo de La Coruña 15/16 away and third kits use the same rounded neck Lotto template. The away jersey is all white with a light blue sash on the front on its front. The third kit is in a lighter shade of red with black accenting via its collar and sleeve cuffs.