Known for releasing a slew of kits every season, Grêmio Foot-Ball Porto Alegrense have unveiled their 2016 fourth and retro shirts from Umbro Brasil. 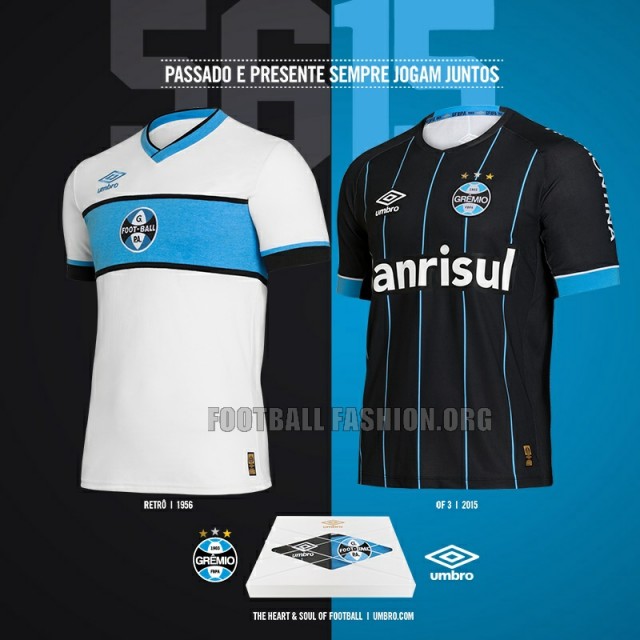 The Campeonato Brasileiro Série A has already dropped home, away, third and Copa Libertadores championship 20th Anniversary jerseys since switching from Topper to Umbro back in January of this year.

The Gremio 2016 Umbro fourth kit continues the club’s trend this year of using a different Umbro design for each of its shirts. The new change jersey has a black based with a series of six sky blue pinstripes on its front. The shirt’s sleeve cuffs are also in sky blue. The kit has  a simple v-neck collar with a sky blue rear inside neckline on which “GFBPA 1903” and the Umbro diamond are printed.

The fourth kit is available as a box set with the Gremio 2016 retro jersey. The throwback shirt is inspired by the home kit worn by the team when they won the 1956 Campeonato Gaúcho and Campeonato Citadino de Porto Alegre titles. It is mainly white with a light blue chest band bordered in black. The Gremio retro kit has a classic overlapping v-neck. Its sleeve cuffs are black with sky blue trim.

Third-placed finishers in Série A last season, Grêmio are currently in fourth place in Brazil’s top division of football with two matches left in the season.