Former A-League champions Newcastle Jets Football Club released their 2015/16 home, away and third kits ahead of the kickoff to the ongoing Australian soccer season. They are provided by sportswear firm BLK. 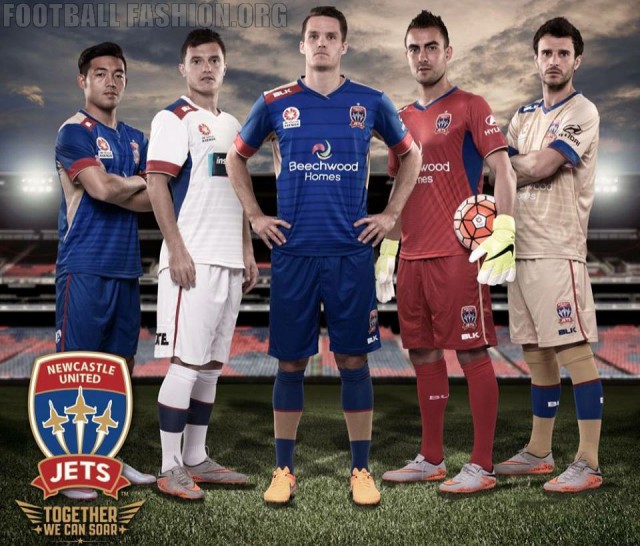 According to The Jets: The home strip sees a shift away from the vertical red stripes that have been prominent throughout the past four seasons, thereby helping provide the Club with its own identity in the Newcastle sporting market.

However the home kit, featuring Beechwood Homes on the front, does maintain a ‘Jets Blue’ base and feature tonal horizontal stripes. Gold – the colour synonymous with the club’s most successful on field years throughout the Hyundai A-League era – has been included as a feature, as have red accents to ensure that the three core colours in the club’s crest have been utilized.

The 2015/16 BLK away kit is a white base reversal of the club’s home strip and features Inspirations Paint on the front. The simple, yet modern design features the same tonal stripe motif as the home jersey in a subtle grey shade, with blue as a secondary colour.

As with the home kit, red has once again been used on the shoulders and sleeves, while gold trim on the collar and hem complete an exciting new design.

The Newcastle Jets15/16 BLK third kit is a product of club member and fan feedback. The uniform has a full gold base and will be worn for three member selected home games throughout the Hyundai A-League 2015/16 season.