With five loan players from Chelsea FC on their roster, Vitesse are currently in fifth place in the Dutch Eredivisie table. 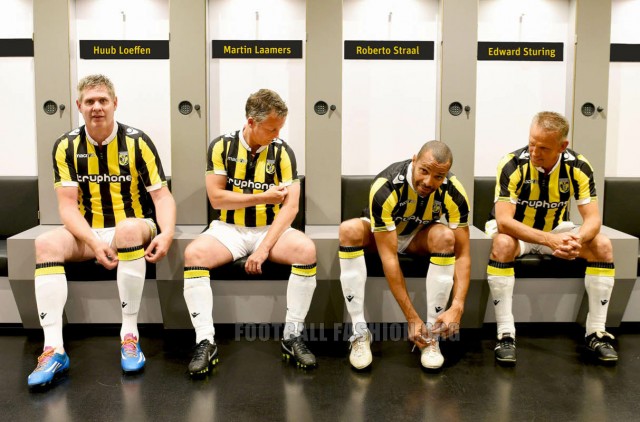 The club is wearing kits from Italian firm Macron for the second season in a row as it celebrates the 25th anniversary of its first appearance in European competition (the 1990 UEFA Cup). 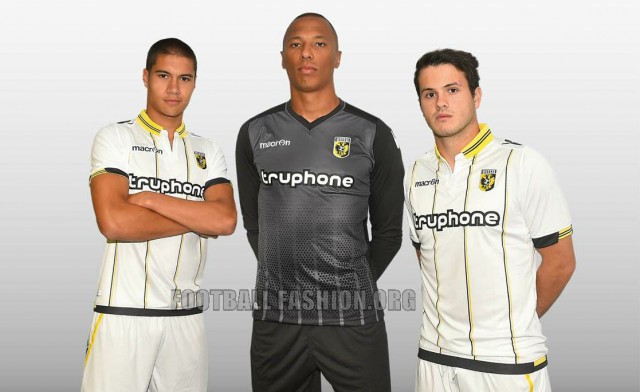 The Vitesse 2015/16 Macron home jersey is in the team’s usual blue and black vertical stripes. It has a white classic polo collar. The sleeve cuffs and waistline of the jersey are also mainly white. The back area of the kit is mainly black to accommodate player names and numbers.

Vitesse Arnhem’s 15/16 away kit has a white base with pinstripes in the club’s primary black and yellow. Its polo collar is yellow while its cuffs and waistline are black with flashes of yellow and black.

Both kits feature the text “EST. 1892” on their upper outside back areas in reference to the year of the team’s founding. An graphic with the name of the club, its badge and the eagles from its badge is printed on the inside neck of the shirts.