Looking for their first Danish Superliga since 2005, Brøndby IF recently unveiled their 2016/17 away kit from technical partner hummel. 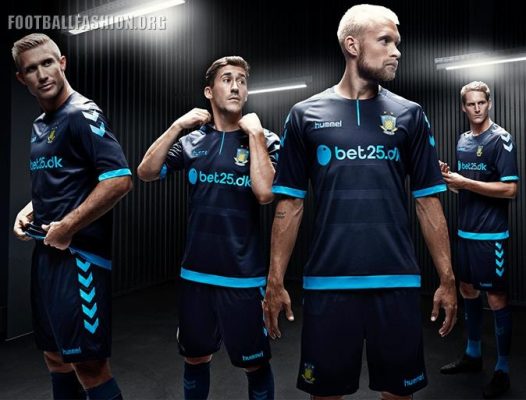 Drengene Fra Vestegnen (The Boys from the Western Outskirts) are wearing their 2015/17 home shirt for the second year in a row this season. Their 15/16 away jersey is now being used as their 16/17 third kit.

The dark blue Brøndby IF 2016/17 shirt uses the same bespoke hummel design as the club’s home kit. It has a modern roundneck collar with a short vertical stripes running down its front center. A pair of embossed bands appear below the shirt sponsor logo. Light blue accents the shirt via its hummel shoulder stripes, waistline and sleeve cuffs.

The hummel and sponsor logos are also sky blue along with the player names and numbering. Brondby’s Latin motto of “Supra societatem nemo” (No one is above community) is printed on the back of the shirt’s inside rear collar.

Fourth placed finishers in the Superliga last season, Brondby IF has produced well-known players such as Daniel Agger, Michael Laudrup, Johan Elmander and Peter Schmeichel since the 1980s.