Al-Ahli Saudi Football Club have revealed their 2016/17 PUMA home and away kits that will be worn during the defense of their Saudi Professional League title and King Cup titles. The Saudi powerhouse will also don the new uniforms during the 2017 AFC Champions League.

The Al-Ahli Saudi FC 2016/17 home kit is in the three-time league champions traditional white with a green band running across its mid-front. Its collar and sleeves are trimmed in green. Green also appears on its underarm areas. The shirt uses the classy standing collar template that PUMA introduced through the Arsenal FC 15/16 home jersey.

Al-Ahli’s 16/17 PUMA away jersey is dark blue with a block of green on its right side. The navy blue transitions to green through a smoke effect. Flashes of gray appear at the front of the sleeves. The crewneck design used for the shirt is new for PUMA’s 2016/17 kit cycle. 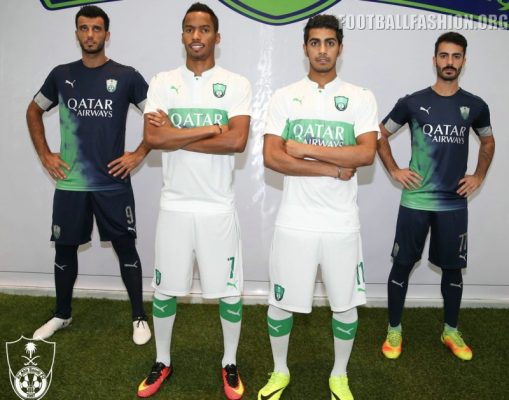