Toronto FC today revealed their 2016 adidas away jersey with modeling from star players Sebastian Giovinco, Jozy Altidore and Michael Bradley. It will be available at the World Soccer Shop and Kitbag MLS stores along with the Canadian club’s 2015/16 home shirt. 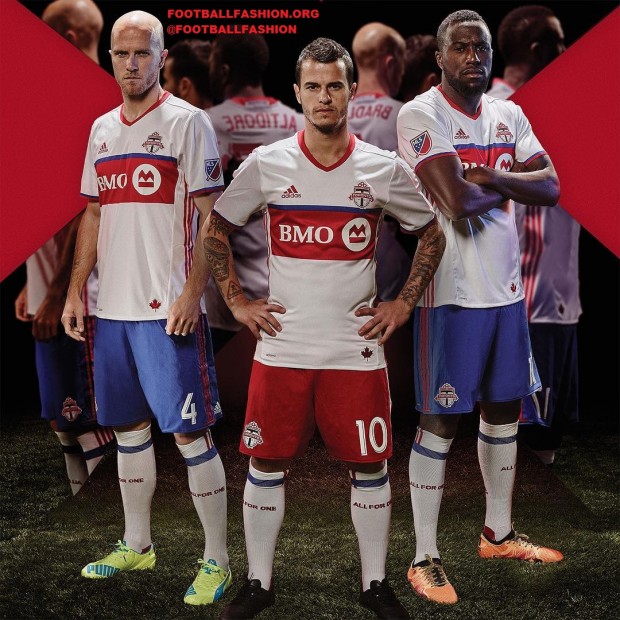 According to a release from TFC: As Toronto FC celebrates its 10th (Major League Soccer) season, the 2016 alternate kit gives a nod to the past. The dominant red strip across the chest serves as a statement. The club will always be first and foremost, red.

New this season, is the introduction of a subtle blue strip which, not only represents the city’s flag, but also pays tribute to and celebrates the history of soccer in Toronto and the 40th Anniversary of its last professional soccer championship in 1976. This classy kit serves as a reminder that soccer runs deep within the fabric of our city.

The jersey uses a new adidas v-neck design featuring red side stripes and a red collar. The sleeve cuffs and inside neck taping of the shirt are in the red and blue of its chest stripe. The three dimensional Maple Leaf is printed on the kit’s lower front left in recognition of Canada’s national symbol.

The launch of the Toronto FC 2016 away shirt is supported by a video featuring pivotal moments from soccer in the city of Toronto and of TFC. Several of the club’s iconic players (including talismanic striker Dwayne De Rosario) are featured in the video wearing now classic Toronto FC kits.