Honduran powerhouse Club Deportivo Olimpia have officially presented their 2016 home and away kits from PUMA. 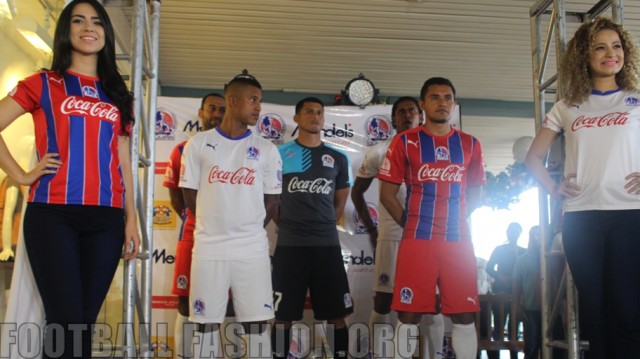 Los Leones (The Lions) will return to match action in January in an all new white home shirt and a red and blue away jersey. Both use modern slimfit designs from PUMA.

The CD Olimpia 2016 home jersey features a blue standing collar with a small slit at its front. A series of subtle stripes made up of fine diagonal lines run along its front. The twenty- nine time Liga Nacional de Fútbol de Honduras champions away kit features a red crewneck collar that blends into the shirt’s red shoulder stripes and sleeves.

Among Honduras’ best-supported clubs, Olimpia made it to the semi-final stage of the Apertura 2015 playoffs following a third-placed regular season finish.