Football Club Bari 1908 switched kits providers to Nike during their offseason. The club known for bouncing between the Italian Serie A and Serie B leagues had worn gear from Errea in the decade move the move. 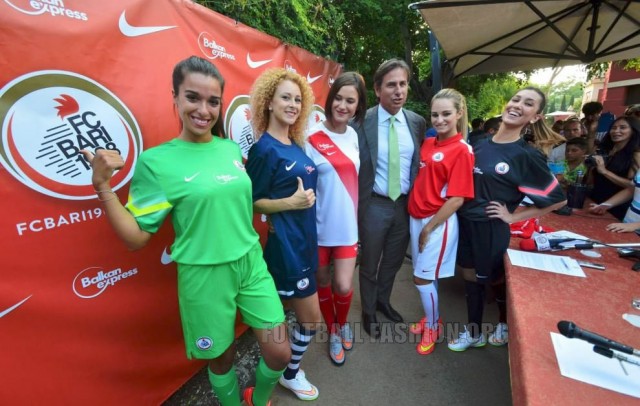 The FC Bari 1908 home, away and third kits for their on going Serie B campaign were revealed shortly after the technical sponsorship announcement. The home strip is in the team’s traditional red with white accents. The polo collared shirt uses Nike’s omnipresent Challenge design.

The Bari 2015/16 away kit is arguably the highlight of the range. It uses the new Nike Sash template featuring a white crewneck base with a red sash on its front. The sash fades out towards the jersey’s waistline.

FC Bari 1908’s latest playing collection is completed by a navy blue third kit that uses Nike’s minimalistic Park V design. As is the case with “I Galletti” (The Cockerels) new home and away shirts, it has the text “FC Bari 1908” printed in cursive font on its upper outside back.

Serie B champions on four occasions, Bari are currently in third place in Italy’s second division of football after fifteen matches played.