La Federación Costarricense de Fútbol (FEDEFUTBOL) have unveiled the New Balance third kit that will be worn by all of Costa Rica’s national teams during the 2015/16 international football calendar. 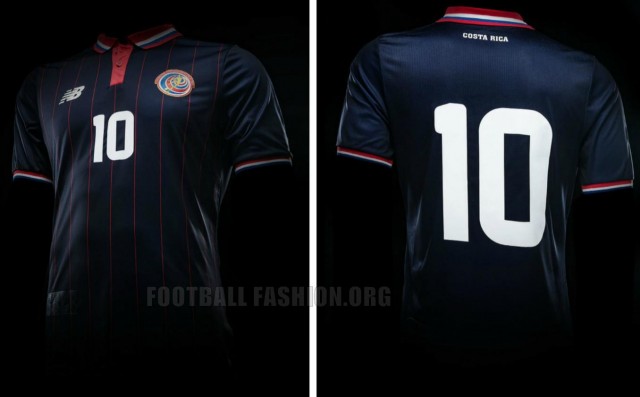 Los Ticos new change jersey has a dark blue base with a series of red pinstripes. It uses the same classic football shirt, polo collared design as the Costa Rica 15/16 NB home and away kits released in May and worn at this summers CONCACAF Gold Cup 2015. 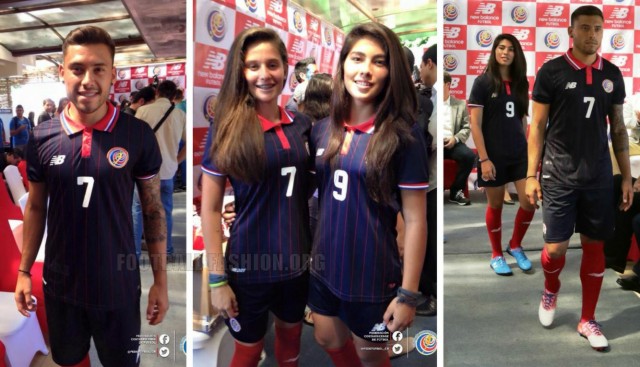 The collar and sleeve cuffs of the jersey are in the national colors of the Costa Rican national flag. “COSTA RICA” is printed in white on its signoff area while one of the team’s nicknames “LA SELE” is embossed on the lower right of the front of the jersey.

Costa Rica under-17 national team players Pamela Mora and Merelyn Alvarado were on hand to model the women’s version of the shirt at Tuesday’s launch event. Under-23 squad members David Ramírez and Ronald Matarrita donned the men’s kit.

The Costa Rica 2015/16 New Balance home, away and third kits will be on sale at Kitbag, World Soccer Shop,UK Soccer Shop and Subside Sports.