Currently in fourth place in the Campeonato Brasileiro Série A table, eight-time Brazilian champions Palmeiras recently revealed their 2015/16 away and third kits from adidas.

The Palmeiras 15/16 away jersey is a largely white affair with adidas branding in the club’s first choice color of green. One of the shirt’s side panels is green while the other is red. The use of the latter ensures that the colors of the Italian national flag are incorporated into the shirt in recognition of the club’s longstanding ties with the Brazilian-Italian community of São Paulo. 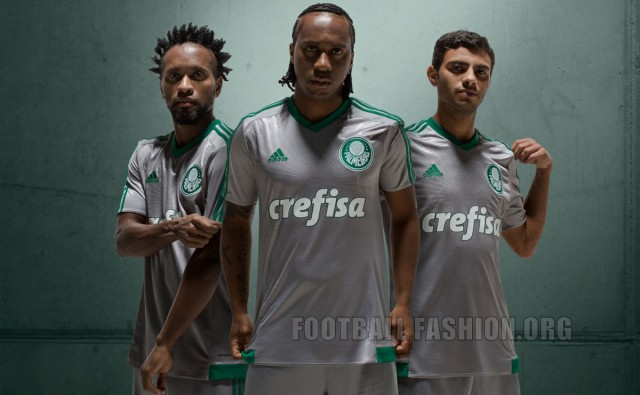 The Palmeiras 2015/16 adidas third kit celebrates the 100th anniversary of  the team (then called Palestra Italia) winning its first title, the Taça Savoia, by using a silver base. An image of the Savoia Cup is also embossed on the front of the jersey.

The Palmeiras 15/16 change shirt uses a stylish v-neck and green adidas stripes on its shoulders and side waistline areas. It is matched with silver shorts and socks.