Released in the lead up to the new MLS season, the Seattle Sounders FC 2016 adidas home jersey sees the popular team from the Pacific Northwest back in their popular Rave Green with a heavy dose of blue thrown in. This is our World Exclusive up-close look at the Sounders new primary kit. 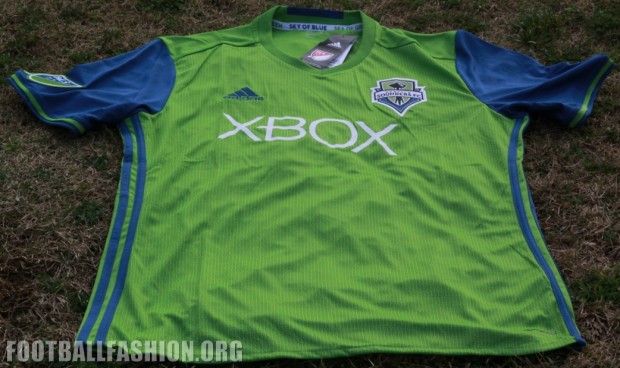 Made of adidas’ lightweight polyester fabric, the Seattle Sounders 2016 home shirt is extremely light and comfortable on the skin. It fits true to size but does have an interesting flare towards its waistline (perhaps to support the many twisting and turning motions involved when playing soccer).

The look of the jersey is completely modern and features a brand new kit design from adidas highlighted by a ribbed v-neck collar and the brand’s famous three stripes on its flanks as opposed to its sleeves and shoulders.

The Seattle Sounders 2016 home jersey isn’t just an adidas teamwear kit with the club’s badge embroidered on it. Instead it is has several well thought out elements specific to the team and Major League Soccer. The most customized of these is a repeating series featuring a stylized version of the letter “S” throughout the fabric on the front of the shirt. Based on the club’s name, the letters are cleverly arranged as a series of pinstripes for a pleasing visual effect. 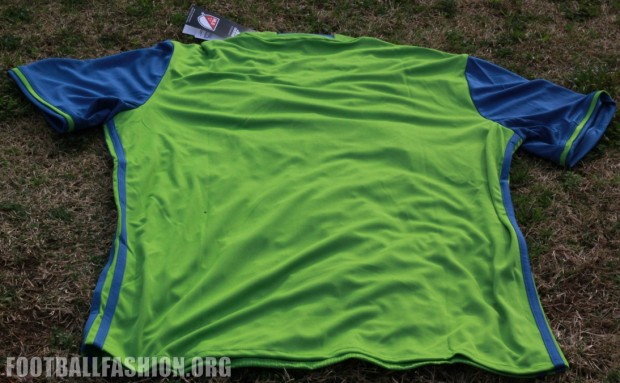 The Sounders’ badge is relatively large on the kit in a move that has been well-received by Seattle’s massive fan base. The fans were also taken into account in creating the inside neckline of the new shirt. It reads “Sky of Blue, Sea of Green.” based on supporter group input. The text is actually the name of a popular fan chant.

The colorway Sounders FC 2016 adidas home kit sees the use of blue sleeves of the team home shirt for the first time in its Major League Soccer history. This highlights the secondary color of the club well and works in good combination with its predominant green. The colors not only represent the Seattle Sounders but also the verdant look of the Puget Sound region and its Pacific coastline.

Not be be overlooked on the jersey is the sewn-on MLS patch on the right sleeve of the kit. Customized for Sounders FC through the use of the club’s colors, this feature of all MLS replica is a lovely value add since it adds authenticity for the shirt. Patches of kits from other league (e.g. the Premier League) either have to be purchased and added to the jerseys via custom orders. 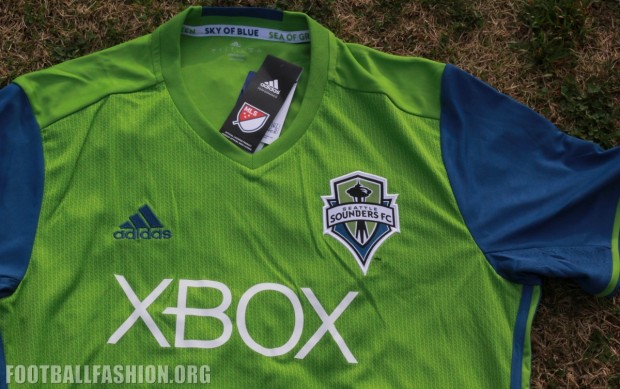