According to Warrior Football: Since Sevilla FC’s birth in 1905 the club has grown steadily through the Spanish Leagues to become the most successful team in Andalusia. The new atomic blue away kit embraces the club’s rich sporting heritage, whilst also paying tribute to the modern, attacking football that led Sevilla FC to its latest European title. 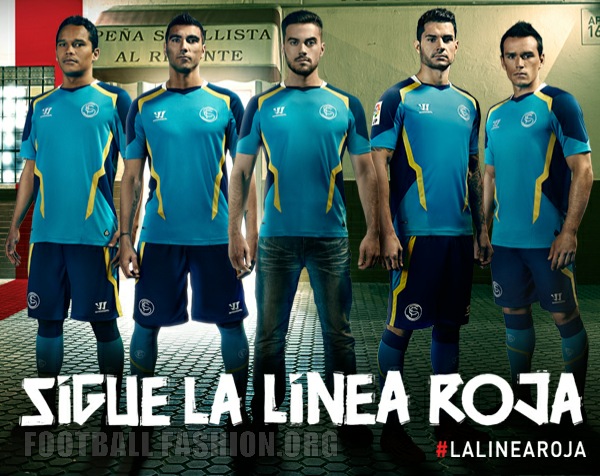 The vibrant kit design takes inspiration from the rich and lively culture of the city of Seville and the piercing blue colourway will ensure the players stand out on the pitch. The golden flashes descend down the shirt sharply dissecting two shades of blue and representing the speed and performance needed of a winning side. The overall look of the kit is finished off with blue shorts and blue socks.

Sevilla FC right back, Coke, knows exactly what it takes to look and feel like a champion, “Every time I pull on the Sevilla FC jersey I know what the team and supporters expect. It is this passion and drive that is reflected in this new away kit. I am proud to wear a kit that so perfectly reflects the team’s attitude and culture.”

To ensure the highest level of performance, the kit has been designed using Warrior’s revolutionary apparel system War-Tech, highly breathable material with moisture-wicking fabric to keep perspiration away from the skin – ideal for playing in hot climates. The four-way stretch mesh panelling under the arms, across the shoulders and on the back of the shirt, was engineered to provide added comfort.

Head of Warrior Football, Richard Wright commented on the design of the kit, “We have created an away kit which is designed to support player performance and to make them stand out. We think this colourway captures the spirit and drive of the club – we look forward to seeing some dazzling performances from the team in this kit.”