North American Soccer League champions for the last two years, the New York Cosmos have signed a kit deal with Inaria after one season with Under Armour. 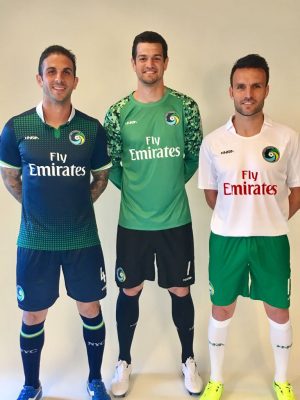 The Brooklyn soccer club that boasts former Italy and Juventus striker Amauri on their roster unveiled their 2017 home and away kits as part of the technical sponsorship announcement.

For the first time in their history the Cosmos will wear a non-white kit. The team’s new primary jersey has a dark blue base. A series of green dots that fade out via a gradient effect towards the shirt’s middle run along its front. The kit features a white modern polo collar.

The New York Cosmos will play in their famous white shirt / green shorts combination for their 2017 away uniform.