Worn during the team’s 1-0 win over Cruz Azul last Sunday, the latest Pumas change kit features Nike’s Vapor with AeroSwift design that is currently being used for all of the sportswear firm’s major club and federation shirts.

The modern cut, v-neck kit is a dark blue affair with a series of tonal horizontal stripes on its front. The stripes become wider in width towards the bottom of the shirt to create a gradient effect. The Nike Swoosh, puma head and sponsor logos on the jersey are all in white to contrast with the rest of the kit.

The gold of Pumas’ crest in present as part of the expanding stripes running down wash side of the shirt.

Pumas’ 2016/17 Nike home and away kits were released last summer and have been worn since the start of the team’s Apertura 2016 season. 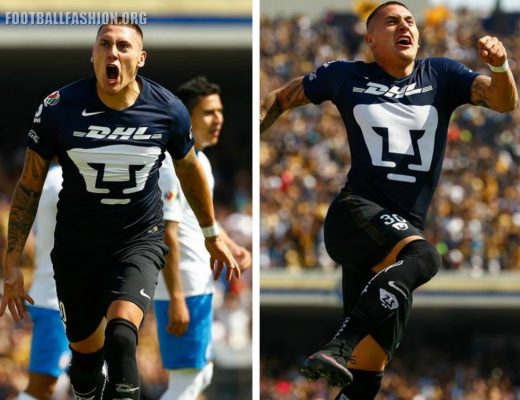