Continuing a tradition 48 years in the making, the PUMA King is back. This time, it’s Made in Italy with special attention to the details that have turned it from boot to legend. 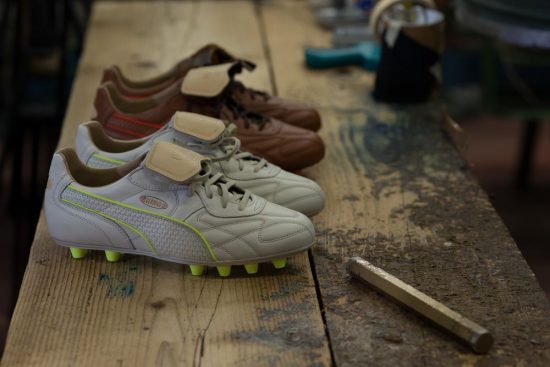 The Made in Italy’ mark promises craftsmanship. The country has long had a reputation for fine, handmade shoes. This PUMA King M.I.I boot showcases the value of handmade football boots with every single stitch. Its construction relied entirely on the individual skills of the artisan who paid exceptional attention to every detail from toe to tongue.

It’s a King that was made with a careful, artistic touch, and that delivers on its legendary promise of touch. Ready to take its place in the world as the finest of all time.

The PUMA King has been worn by kings. Kings from Portugal to Brazil, from the Netherlands to Argentina. These footballers’ skills and goals are continually deemed the greatest of all time. More than a boot, it’s a football legend steeped in firsts and only.

Introduced in 1968, it was hailed for its quality materials and “South American” style toe which brought the foot closer to the ball, thus improving touch. It was further enhanced and developed in the 70s. And in 1986, it passed 6 players, touched the ball 11 times, and scored 1 goal to seal its supremacy in the football realm.

The King MI.I soccer boot is now on sale available at World Soccer Shop in brown and white colorways.