PUMA evoSPEED 1.5 Tricks edition has been one of the soccer boots of the summer of 16. It’s been seen in action since French superstar Antoine Griezmann impressed at EURO 2016 in them. This is our World Exclusive review of PUMA’s latest speed boots. You can pick up a pair today at Kitbag and World Soccer Shop. 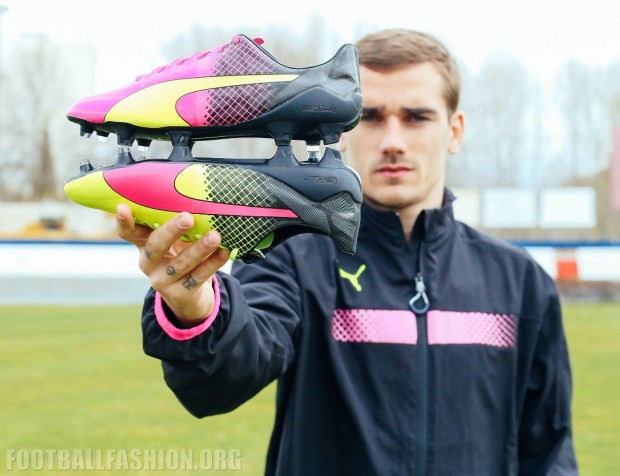 A fixture on the feet of PUMA athletes such as Sergio “Kun” Aguero (Manchester City and Argentina), Marco Reus (Borussia Dortmund and Germany) and Radamel Falcao (Monaco and Colombia) since the silo was released in 2012, the evoSPEED 1.5 is the most technically advanced and best performing boot in the line so far. Read on to find out more.
Before we delve into our review of the evoSPEED 1.5, here are the PUMA specifications on them. 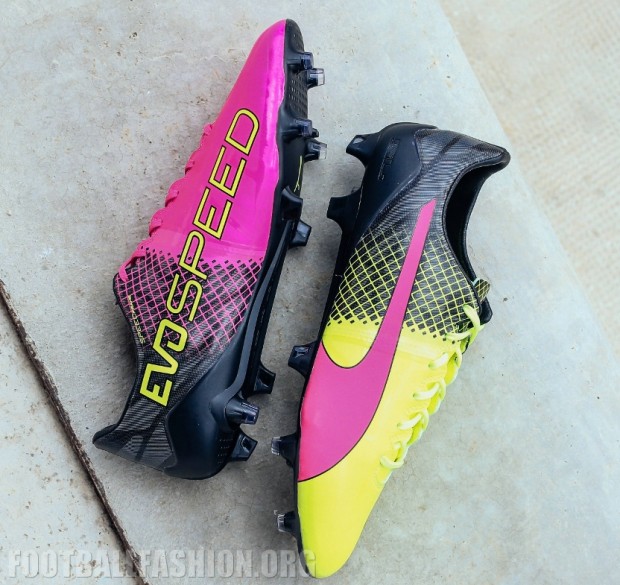 PUMA made a splash by releasing the evoSPEED 1.5 as a dual colored Tricks edition ahead of the Copa America Centenario and EURO 2016. The bold Pink Glo and Safety Yellow left boot / right book combination is visually stunning, in your face and simply brilliant! Beyond the base colors you’ve got a grid pattern midfoot that transitions to black at the back of the boot. 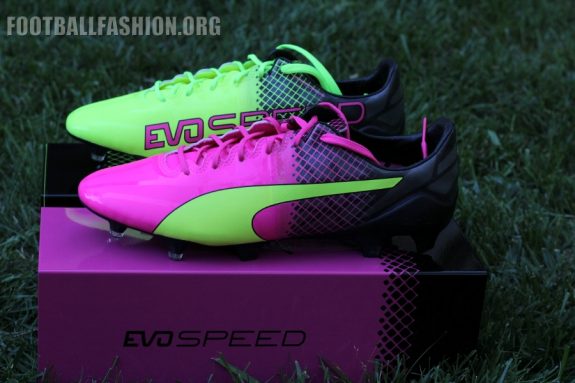 PUMA’s Formstripe runs on the outside of the boot while the word “evoSPEED” runs along the instep for the first (and hopefully not the last) time in the silo’s history. Put all of this on a microfiber upper and a high tech SPEEDFRAME soleplate and you’ve got a good looking, attention grabbing boot that will catch the eye of everyone on the pitch and in the stands. They’re the type of boot that you’ll be expected to perform in.

We’ve tried every version of the PUMA evoSPEED since it was first released four years ago. Since that time we’ve seen recent versions that were narrower in width. As a result it was best to go half a size up for players with normal width feet. This was particularly so when you add some decent quality soccer socks or TruSox in the mix. PUMA’s designers have rectified the width issue with the evoSPEED 1.5 by making wider and better fit for the average foot. 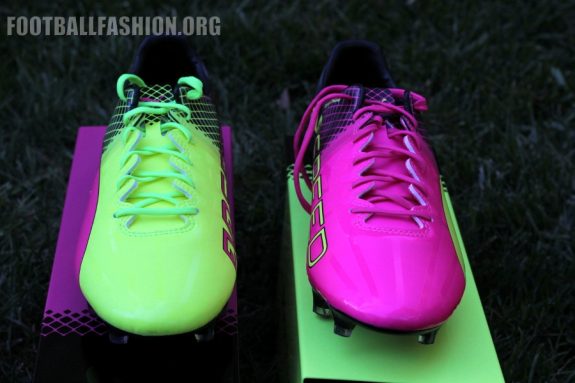 In terms of length, the PUMA evoSPEED 1.5 also runs true to size with what we thought was the optimal amount of space (half a thumb’s width) between the big toe and the upper.

Our testers were amazed at the comfort of these boots from the first time they slipped it on. Everyone agreed that it provides an excellent, lightweight ride with absolutely no stud pressure on the bottom of the feet and no hotspots from unwanted movement of the foot against the upper. 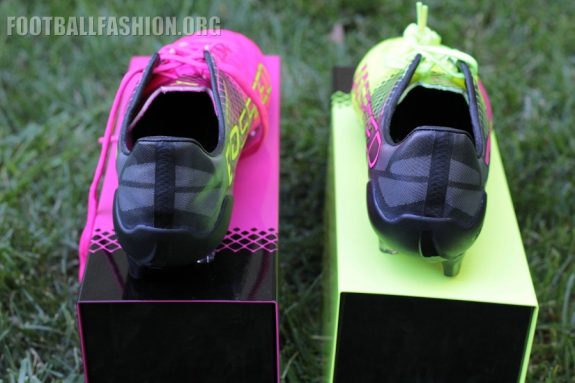 On the pitch, the evoSPEED 1.5 have turned out to be the best boot in PUMA’s speed silo to date (and we’ve tried them all).

While we’ve never been massive fans of lightweight speed boots and have found them to take longer than power and control boots to break in, we found the PUMA evoSPEED 1.5 to break the mold of their genre.

The evoSPEED 1.5 slides onto the foot like a glove and is immediately read for action. We broke it in on natural grass with some running, agility drills and shoots, passes and trapping using a rebounder. We also did some sprint work with them on artificial grass. All of this amounted to about an hour of action before hitting the pitch in a competitive situation. 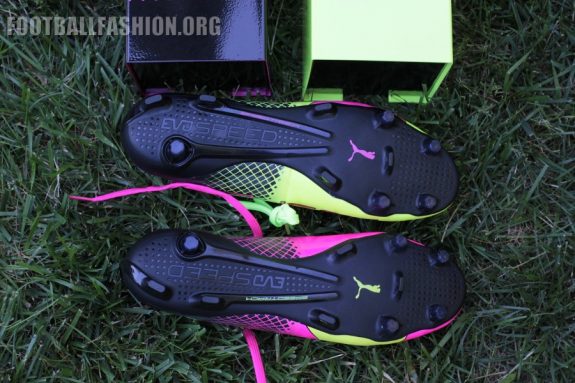 The PUMA evoSPEED 1.5 is a shoe built with a focus of speed and agility before anything else. Its light weight is one of the keys to this. The other is its brilliant soleplate features support from PUMA’s SpeedTrack for reactivity and stability. The mix of blades and studs provide excellent traction of both natural grass and artificial grass. Combined with the SpeedTrack the level of stability provided is second to none and good enough to avoid the dreaded ankle turns that can occur when wearing cleats on 3G surfaces. 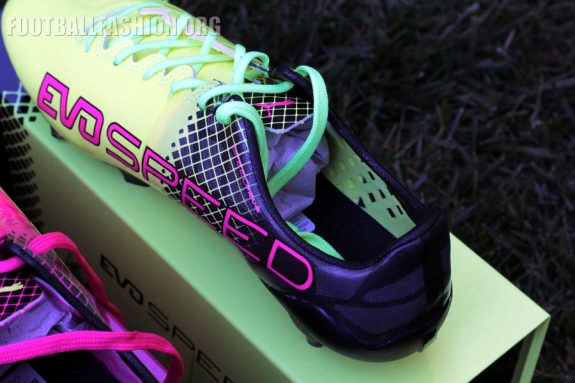 Although the upper of the evoSPEED 1.5 is lightweight and actually made of a grid on the inside of the boot, its touch is on par with a control boot. All we know of the upper is that it is a uniform monolayer microfiber with a small amount of shiny texture at its front. Yet it performs almost as well as the world class upper of the PUMA evoPOWER 1.3. We’ve been able to do some things with the PUMA evoSPEED 1.5 that we have not with other speed boots because of its touch. These include killing the momentum of the ball on first touch, making accurate on the ground passes without much change in the force applied because of a lightweight upper, and hitting some chip passes with deadly accuracy! 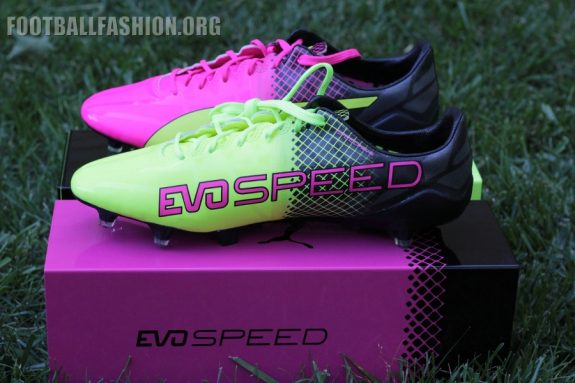 The one area of touch for which we required some practice with the PUMA evoSPEED 1.5 is for lofted passes made with the front of the foot. Making these is not as intuitive as making other types of passes with the boot. We found that we often over hit the ball when first trying these. This resulted on them usually going about a foot over the intended landing point. It took a good hour of repeated long range passes to master them with the evoSPEED 1.5.

The on the pitch performance of the PUMA evoSPEED 1.5 resulted in them being our first choice boot during the summer of 2016. We wore them on artificial grass more than any other surface and found them perform better than turf shoes on it. The combination of light weight, responsiveness, stability and surprisingly good touch makes the evoSPEED 1.5 a boot that you can trap with ball with, execute a skill move and sprint off with on one play. We often felt like we had some sort of performance enhancing shoe on when wearing them. 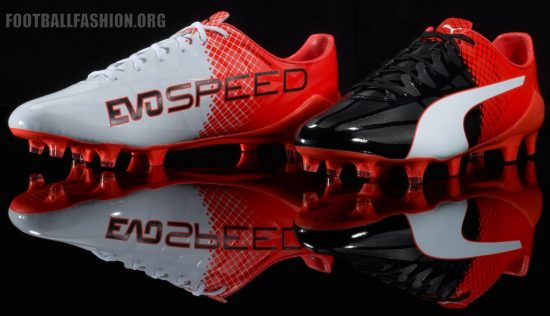 Speed boots are not known for protection. However, the PUMA evoSPEED 1.5 surprises again in this area.

Definitely as product of the boot’s microfiber upper, we found the evoSPEED 1.5 to offer an unexpectedly decent level of foot protection for a speed boot. It’s not the type of boot that will make you totally immune to stamps and body to foot collisions. However, it will give you about 50% more metatarsal protection compared to even heavier (6 to 7 oz.) speed boots. If we had to compare its protection level to other boot types we’d say that it is equivalent to the lightweight eversion of control boots (e.g. the PUMA King SL).

Even After two months of play of artificial grass and natural grass the evoSPEED 1.5 looks almost as good as the day we slid it out of PUMA’s Tricks edition presentation case. Has very little creasing and absolutely damage from wear and tear. They’re a good product that should take us into 2017 even with two match of action per week.

A game-changer in the speed boot category, the PUMA evoSPEED 1.5 is an excellent addition to the sportswear giant’s latest soccer boot arsenal. It can be worn by any player wanting speed and great touch. We recommend them for fullbacks, wingers, forwards and attacking midfielders.