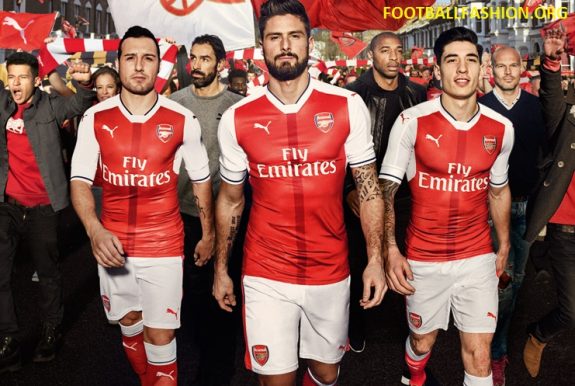 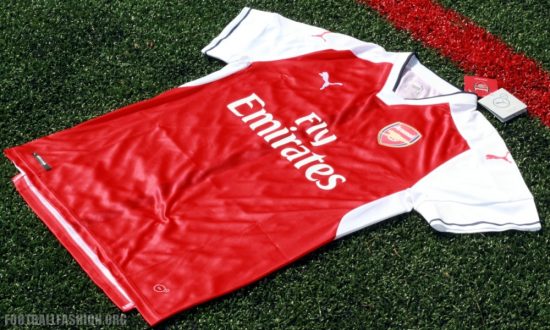 The authentic version that you see some of the world’s best players wearing this EPL season are extra snug affairs (you’ve got to be quite fit to look good in these) designed to support their muscles while in motion. They include PUMA’s new apparel technology ACTV Thermo-R, strategically inserted in both the front and the back of the shirt to help players maintain an optimum body temperature.

For the soccer fan and / or shirt collection or those not wanting to spend the extra $85 for player issue gear, PUMA has the replica version of the kit. That’s the version we’re bringing you a look at. 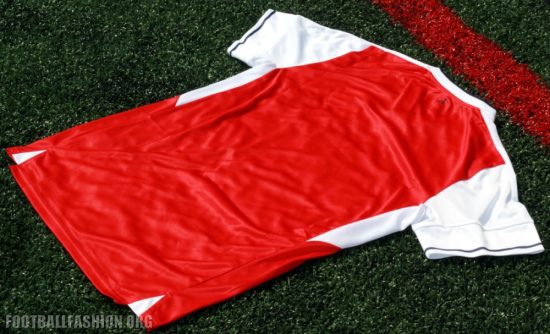 PUMA has look based to the 1990s for the inspiration behind the Arsenal FC 16/17 home kit. Its collar is a throwback to that of the 1992/94 Gunners kit worn when a much-loved team featuring greats such as Ian Wright, Ray Parlour and Martin Keown took home the FA Cup, League Cup and UEFA Cup Winners’ Cup. Though totally modern, the fabric used for the shirt even carries the polyester shine of football kits of over twenty years ago. 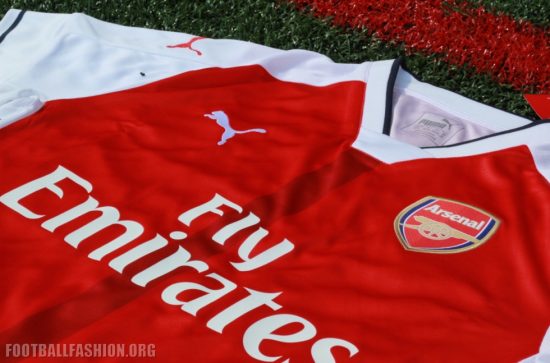 The white sleeves that have been a fixture on Arsenal’s primary kits since the 1969/70 season are back in the new shirt but thankfully sized by today’s standards. Thankfully PUMA did not decide to go with the ridiculous oversized sleeves that were all the rage for casual men’s shirts and soccer jerseys back in the 1990s.

One of the biggest complaints that fan had with Arsenal’s previous kit provider, Nike, was the lack of detailing and generally bland jerseys during the Gunner’s 1994 to 2014 run with the American sportswear giant. PUMA is regarded to have done much better with their Arsenal FC offerings since signing with the North Londoners in 2014.

The Arsenal 2016/17 home kit has a set of finer elements that fans will love. Our favorite is the tonal vertical stripe running down the front middle of the jersey. In a darker shade of red that the red of the kit, it is based on the sets of three (so chosen because the club’s outfitter at the time was adidas) tonal stripes that appears on the 92/94 home shirt. The v-shaped neck of the 16/17 shirt ends with trapezium shape at its front. Back in 1992 this shaped featured adidas’ new logo at the time. 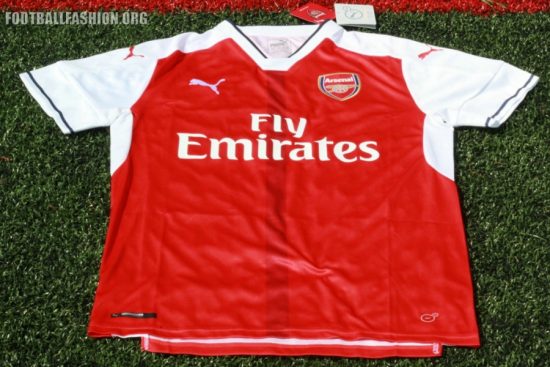 PUMA has put its stamp on the Arsenal 2016/17 home kit with its always attractive Cat logo on the sleeves and chest. Its long-lived T7 Form Stripes are present on the shoulders in the form of lightweight ventilated fabric. The same material is used for the under arm panels of the jersey. Coupled with the lightweight PUMA dryCELL moisture-wicking fabric used for the rest of the kit, these elements make it match-grade even in the professional ranks. 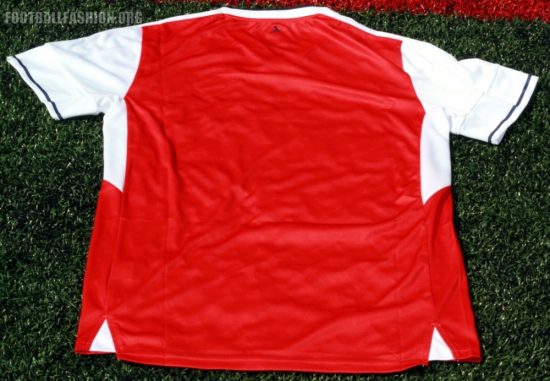 Last but not least, a black letter “A” is heat transferred on the signoff area of the jersey in a node to Arsenal’s storied past. The “A” in question was used in the word “Arsenal” in the team’s Victoria Concordia Crescit (VCC) crest from 1949 to 2002.

The fit of the Arsenal 2016/17 PUMA home replica kit is true to size. It is not as slim-fitting as most of PUMA’s other soccer jerseys these days (perhaps because of its nineties influence) so if you want to show off your muscularity we suggest ordering it in a size down. Once on the dryCELL fabric is quite silky on the skin and, needless to say, extremely comfortable. You can wear these in just about any casual setting in which sportswear is acceptable, for training or for your next runout of soccer in the park.