Unione Sportiva Sassuolo Calcio will appear in the Italian Serie A for the fourth consecutive season during their 2016/17 campaign. The team is also participating in the UEFA Europa League thanks to their impressive sixth place finish is Serie A last time out. 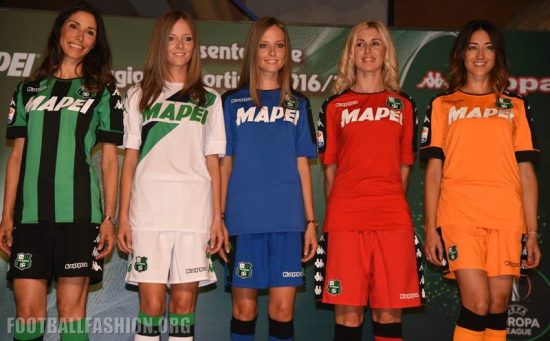 Sassuolo recently launched their 2016/17 home, away and third kits from Kappa Sports. They all use Kappa’s new rounded neck, slim fitting Kombat 2017 shirt design. The home shirt uses the traditional black and green vertical stripes of I Neroverdi (The Black and Greens). Black is used to detail the jersey at the collar and sleeve cuffs. The Kappa taping on the shoulders and sleeves are also black.

The Sassuolo 16/17 away shirt is mainly white with a band made up of single black and green stripes on its front. Their new third kit is blue with black accenting. All three jerseys feature the text “SASSUOLO” printed on their outside upper backs.