The Potters today unveiled their first shirts from the Italian sportswear firm with the launch of their 2016/17 home and and kits.

The Stoke City 16/17 Macron home kit in in the team’s classic red and white stripes in a polo collared design inspired by the Umbro jerseys that the club for when they were promoted from the old Second Division to the First Division (now the Premier League) at the end of the 1979/80 season. The team maintained the classic look until the end of the 1983 season.

Stoke City’s 2016/17 Macron away kit is a sky blue affair with white detailing on its flanks, sleeve cuffs and collar. The has a grandfather collar that leads to a three buttoned placket. The buttons on the shirt are in Stoke’s red. 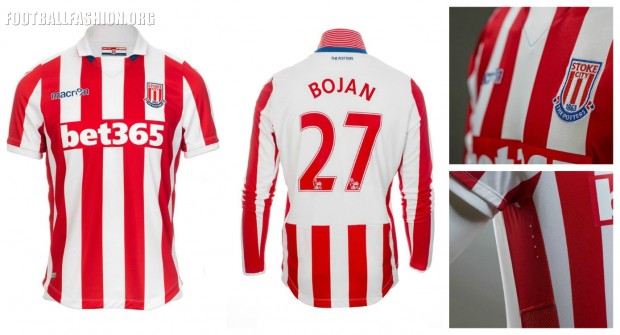 Stoke City will wear their new home kit for the first time when they host in-form West Ham on May 15 in the last game of their 2015/16 Premier League season.