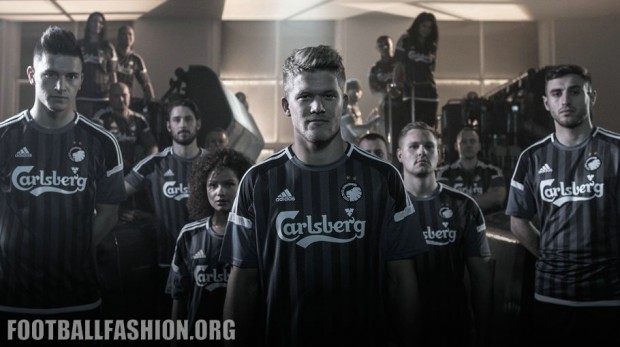 The new FCK change shirt’s look took fan comments regarding its collar, patterns and overall look submitted through the club’s website into account in working with adidas to create the new kit. The end result is a modern look jersey that has a gray base with a series of stripes on its front. The stripes are made up of diagonal black lines.

The FC Copenhagen 2016 adidas third kit features a rounded neckine that is gray in the front and black and white in the back. The black and white detailing is also used along the shoulders of the shirt. The sponsor and adidas logos on the shirt are in white while FCK’s crest is in black and white. The back of the jersey is all gray.

FC Copenhagen’s 2016 third uniform is completed by black shorts and gray socks. It will be worn for the remainder of the ongoing Superliga season and for the first part of the 2016/17 campaign.

FCK released their 2015/16 adidas home and away kits in the sumer and fall of 2015. Both are now on sale at Kitbag, UK Soccer Shop and World Soccer Shop.