The Federación Ecuatoriana de Fútbol and Marathon Sports tonight unveiled the home and away kits to be worn by the Ecuador national team during the 2015/16 international soccer calendar. Both will be available at World Soccer Shop and Subside Sports.

La Tricolor (the Tricolor) will debut their new yellow primary uniform when they travel to Buenos Aires to face FIFA’s number one ranked team in the world, Argentina, in their first 2018 World Cup qualifier. 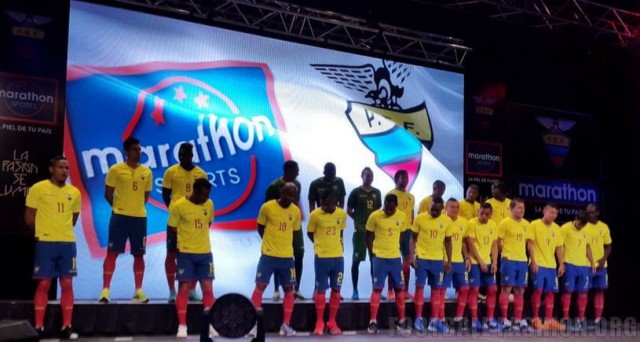 The Ecuador 2015/16 home shirt a classic slim-fitting v-neck look with a series of tonal yellow stripes on its front and back. The red and blue of the Ecuador national flag accent the waistline, collar and inside neck area of the jersey.

The three-time World Cup (2002. 2006 and 2014) qualifiers will wear a blue alternate kit over the next year. It is has diagonal tonal stripes on its front. The waistline, v-neck collar and sleeve cuffs of the shirt are all yellow.

Launched with the theme “La Pasión Se Ilumina‬” (The Passion is Lit), both jerseys have the text “EN EL CENTRO DEL MUNDO” (In the center of the world) printed on their inside necks.