In the red, white and black of the Soca Warriors (named after a form of music native to the Caribbean island), the new jersey uses the same design as the Palermo 14/15 away kit. The very contemporary looking  shirt as a two colored v-neck collar along with horizontal chest stripes that are in the colors of the T&T national flag. The sleeve cuffs are in black with a flash of white. Black side panels complete the kit. The latest Trinidad and Tobago uniform is completed by black shorts and red socks.

Ranked 63rd in the World by FIFA, Trinidad and Tobago achieved some international prominence when they qualified for the 2006 World Cup. The team has long been a regional power with eight Caribbean Cup titles to their credit. The Soca Warriors return to competitive action at the 2015 CONCACAF Gold Cup in July. 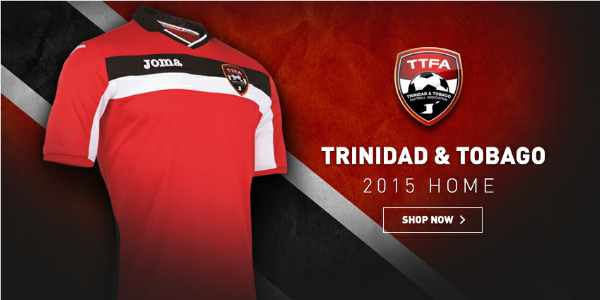