Regulars in Spain’s La Liga for much of the 1980s and early 1990s, Cádiz Club de Fútbol are celebrating International Women’s Day 2017 with a limited edition adidas kit. Los Gaditanos will don the shirt when they Rayo Vallecano in Segunda División  action on March 12th.

The Cádiz CF IWD 2017 adidas kit is in the traditional yellow of the Andalusia club with pink detailing via its shoulder stripes and collar and waistline trim. The adidas logo and Cadiz crest are also pink along with the shirt sponsor logo. 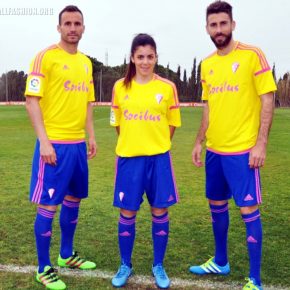 The jersey is matched with blue shorts and socks that feature pink detailing. Match issued version of the kit will include a pink Breast Cancer Awareness ribbon beneath the badge.

Last a La Liga side in 2006, Cádiz  CF are currently in fifth place in La Liga 2 following a six year stint in the third division.