The popular club from the Pacific Northwest will done a primary shirt that introduces a new adidas design for the 2017/18 kit calendar. 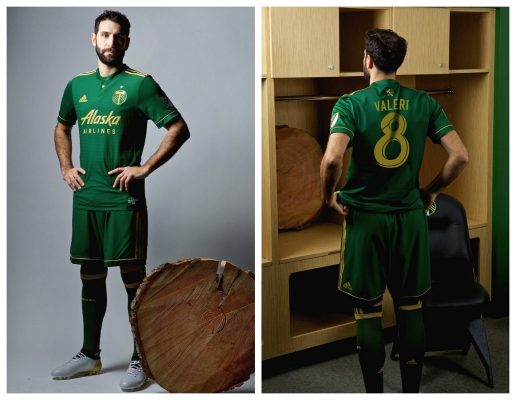 The new Timbers home jersey features a green and gold colorway inspired the  team’s classic NASL kits of the 1970s. The white that has been a fixture of recent Portland shirt is absent with a deeper Ponderosa green forming its base. “Ravens Gold” accents the jersey throughout via Timbers symbols, adidas and sponsor logos.

The kit has a classy two-buttoned Henley collar and is made of a a new engineered flannel fabric with a checkered texture.

Several symbols celebrate the city of Portland and the Timbers forty two year history. They include a Portland city flag jocktag, the Timbers’ Stand Together axes on signoff area. The famous line “There’s a party in Portland, No one is sleeping tonight” from the Timbers Army “Party in Portland” chant appears on the inside neck tape.

A textured silver star appears above the crest of the authentic version of the kit in honor of the Timbers’ 2015 MLS Cup Championship.

The Portland Timbers 2017 adidas home jersey will be on sale at World Soccer Shop, Kitbag and UK Soccer Shop.