New Balance officially revealed the 2016/17 Celtic Footall Club third kit. The shirt has been launched as part of the ‘If You Know Your History’ campaign for the 2016/17 season, which calls on Celtic fans to remember the lead up to the incredible game which has influenced this striking kit design. It will be on sale at UK Soccer Shop, Kitbag, Subside Sports, Lovell Soccer and World Soccer Shop along The Bhoys’ new home and away shirts. 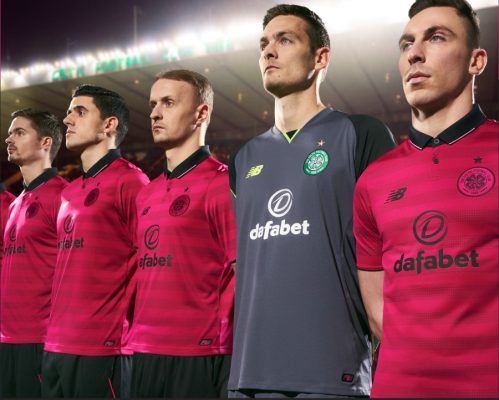 Taking inspiration from the victorious 1967 European Cup final ticket stub cherished by fans – Celtic FC’s new pink commemorative kit will be worn by the team in Europe during the upcoming season. The Scottish Premier League champions are currently in the midst of UEFA Champions League qualifying.

The design is an homage to the ‘Lisbon Lions’ team’s journey to the 1967 final where they defeated Internazionale 2 – 1. The successful 1966-67 campaign made Celtic, at that time, the only domestic side in the world ever to win a season quintuple.

This famous team and their run up to that final makes them ‘A Club Like No Other’ which is why this timeless phrase is applied by heat transfer to the internal hem of the jersey.

Richard Wright, General Manager of New Balance Football added: “The Lisbon Lions feat 49 years ago was truly remarkable, made even more so by hauling in not just one but five trophies that season. These men – 14 of the 15 man squad born within a 10 mile radius of Celtic Park – have left a legacy that may never be repeated by any team in the modern era again. This kit is a testament to this achievement and as we look forward to the future.”

The kit has been developed using NB Dry technology, a moisture wicking fabric that helps keep players cool and dry whilst wicking sweat from the body, making it fast drying.

The shorts that complement the shirt have been designed in black, with the same pink detailing. The kit is finished off with pink socks. To offer added support to the ankle, the socks have built in comfort zones while the foot bed has been developed with polypropylene to help alleviate excess moisture when the foot makes contact with the boot.

The goalkeeper kit is constructed with engineered Flex fabric panels to offer a greater range of movement. These Flex zones are called out by contrast heat transfers.

Scott Brown, Captain of Celtic said: “The 1967 team blazed a trail across Europe on their way to the final in Lisbon which to this day still remains one of the biggest highlights in this club’s illustrious history. It’s an inspiration to think we are following in the footsteps of legends like these and this great history makes Celtic such a special club.”