New Balance has revealed its first collection of LOSC Lille kits, to be worn in the 2016/17 season. The kits have been launched as part of the ‘Déchaîné’ (Unleashed) campaign. It highlights the passion and determination the club has to rise to the occasion and challenge for glory. All three shirts will be available at UK Soccer Shop, Kitbag and Subside Sports. 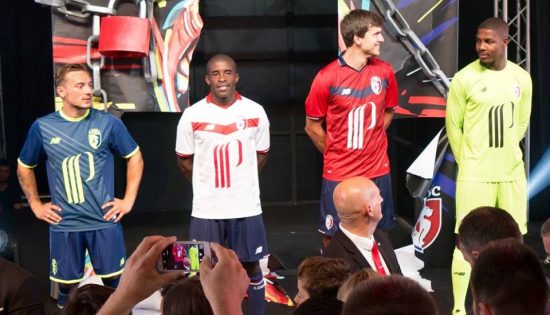 A second message by a former French international, ‘“Le LOSC est bâti sur pierre, rien ne peut l’ébranler” (“LOSC is built on stone, nothing can shake”) has been etched into the internal hem of the home kit.

The home kit also features the fleur-de-lys to the external back neck of the jersey. This emblem celebrates the coat of arms of Lille, the city’s architecture and also its historic landmarks.

All three kits have been developed using NB Dry technology, a moisture wicking fabric that helps keep players cool and dry whilst wicking sweat from the body, making it fast drying. Laser cut and bonded eyelets, placed to the under arm, and an engineered stripe mesh to the side seams for airflow around the body.

The home shirt departs from the Club’s traditional red colour in order to commemorate this historic anniversary. It has been designed on a vivid white base with, vertical gradating chevrons in Pompeian Red and a tonal grey – the chevron is not only synonymous with successful LOSC teams of the past, but it is also a tribute to the fans who support the team by sporting chevrons on the terraces. The shirt is finished off with Pompeian Red V-neck polo collar and cuffs. The accompanying shorts and socks are navy blue featuring tipping trim in club colours.

Lille’s new third kit has been designed in Navy Blue with offset, reversed gradating tonal chevrons providing a unique on-pitch visual. The detail around the cuffs and crewneck has been called-out in Toxic Green, designed to help players pick each other out in-play with cognitive targeting.

Lille captain and French international Rio Mavuba said: “It’s always a massive privilege for each of us to pull on the Lille colours. All three of the New Balance kits not only look striking but feel fresh. In these kits we will play with intensity, strength and pride from the very first whistle.”

Lille Manager Frédéric Antonetti said: “Everyone associated with the club knows of the 1946 double winning side, they have legendary status here. For New Balance to design our latest kits around one of the club’s most historic performances as well as including the recognisable inverted collar and fans’ favourite chevrons will echo around the Metropole.”