Nine-time French Ligue 1 and former European champions Olympique de Marseille have released their adidas home, away and third kits for the 20116/17 season. Al three will be available at World Soccer Shop, Subside Sports, UK Soccer Shop, Lovell Soccer and Kitbag. in the lead up to L’OM’s next campaign.

The white and sky blue Olympique Marseille 16/17 home kit is purposely minimalist and incorporates the fundamental elements of the city of Marseille. It includes the Marseille Cross placed on the heart area. The city’s coat of arms is printed on gold on the inside neckline.

The club says that these symbols mark the commitment of the OM to the city. Olympique Marseille will don their new home kit for  first time May 7 against Stade de Reims at the Stade Vélodrome and and at Troyes on May 14. It will also be worn in the final of the 2015/16 Coupe de France at the Stade de France on May 21.

The theme of simplicity continues with OM’s 2016/17 away kit. It features a navy blue base a white club crest, sponsor logos and player names and numbers. As with the Olympique Marseille 16/17 home shirt, adidas’ stripes run down the flanks of the jersey.

The Olympique Marseille 2016/17 third shirt is the record ten-time Coupe de France winners’ cup kit. Its sky blue and white stripes are inspired by the Argentina national team home jersey. OM says that the look is a good fit since they share the same primary colors as the Argentines and have fans who are just as enthusiastic as those of La Albiceleste. 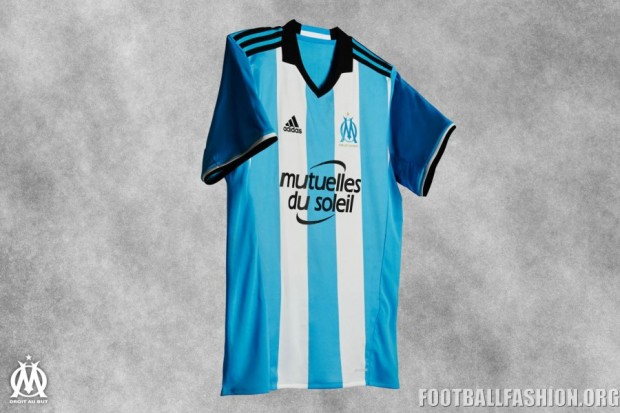 Among France’s most popular teams, Olympique de Marseille are close to the end of a disappointing season in which they sit in thirteenth place in the Ligue 1 table with two matches left to play. Victory against Paris Saint-Germain in the Coupe de France is their only hope of European qualification.