Now omnipresent in professional soccer, the adidas Ace 15.1 is the sportswear giant’s latest control boot designed with midfielders and defenders in mind. Some of the world soccer luminaries who favor the boot include Mesut Özil, James Rodríguez, Oscar, Manuel Neuer and Ivan Rakitić.

Thanks to the team at Lovell Soccer, we’ve been putting the adidas Ace 15.1 through a wear test over the last few weeks in both competitive and training matches. Here is what our tester thought of them. 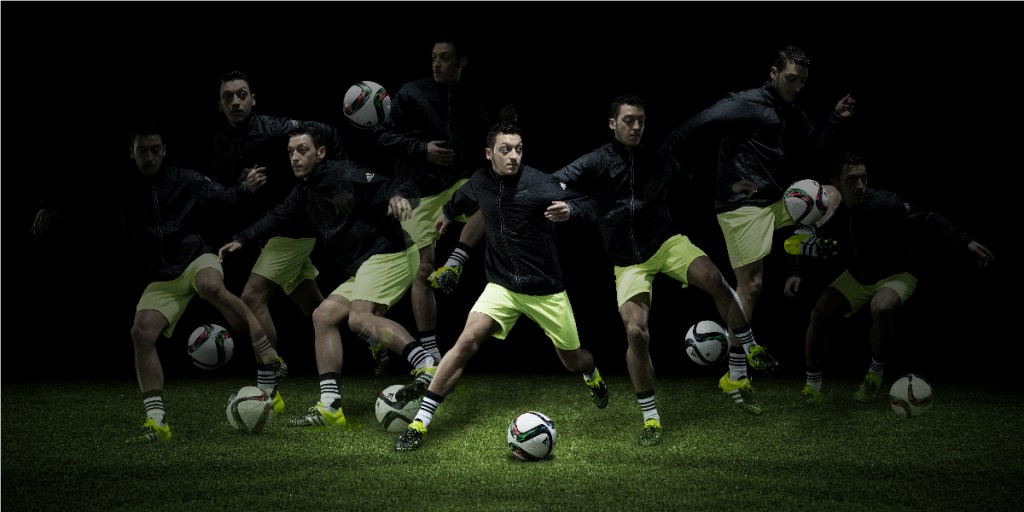 The look of the adidas Ace 15.1 is unlike anything seen before in a football boot. They probably spent quite a bit on research to come up with the design since its replaces both the Nitrocharge and Predator.

Flashy bright colors aside, the Ace introduces a synthetic web (which adidas calls the Control Web) on the entire front part of the boot. An all ground cleat configuration that is made up of a mix of traditional rounded studs and smaller studs similar to those used in turf shoes is also present in an adidas boot for the same time. 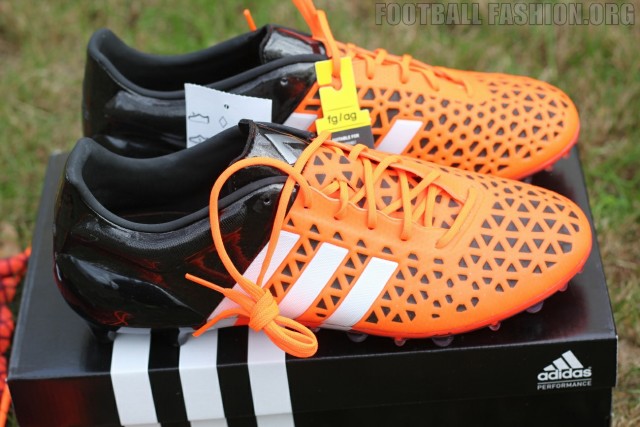 An interesting feature from the back part of the adidas Ace 15.1 is a relatively low profile heel counter. From what I can tell, the boot is firm in the heel area despite the minimal nature of this boot component. It is noteworthy that the upper of the Ace 15.1 has a higher cut than most other modern boots on its rear third. This also aids in supporting the back part of the foot. It reminds me of a bit of the socked uppers that seem to be making their way into the world of football boots nowadays via shoes like Nike’s Magista Obra.

The fit of the adidas Ace 15.1 is definitely true to size so I recommend getting it in your usual boot size. It does fit a bit on the wider side in towards its heel area however. This is great for players with wider feet. I did not find it to be an annoyance by any means since I found the extra width to allow the boot to be easily slipped on (we all have had struggles with modern form-fitting cleats). The good lacing system of the Ace 15.1 allowed for the boot to be pulling in as tight as I like for a nice customized fit. Once on the move, I did not experience any slipping or hotspots from the boot. 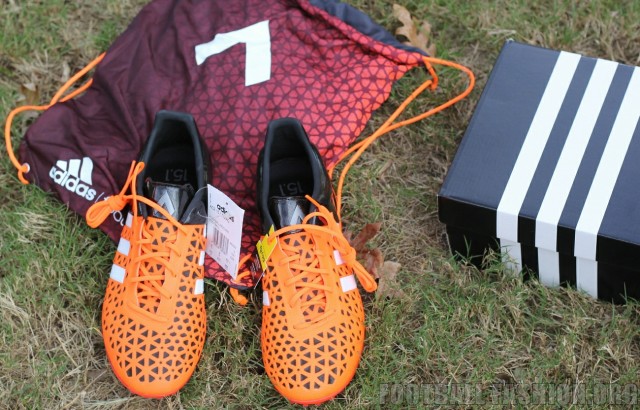 The ride of the adidas Ace 15.1 takes so getting used to. I spent about two hours breaking these boots in via a series of soccer drills that involved forward, backward and lateral movement along with passing and shooting practice. For the first sixty minutes or so I experienced discomfort on the sole of the feet. I even had to switch to a broken in boots twice. The uneasiness went away with use to the point where I felt comfortable wearing the Ace 15.1 in a match situation. I’ve since played in over ten matches in them with no issues and am current using them as my first choice game boots.

The adidas Ace 15.1 has a weight of 8.9 ounces. This is standard for a control boot nowadays so I have no complaints in the weight department. They feel like your typical professional grade control boot once on the feet.

After breaking in the Ace 15.1 I became a big fan of their ride. I supposed that they are now molded to my feet to the point where I don’t even feel like I’m wearing cleats when running in them. I’m still amazed at the shift from discomfort to a very comfortable feel on my feet with wear. 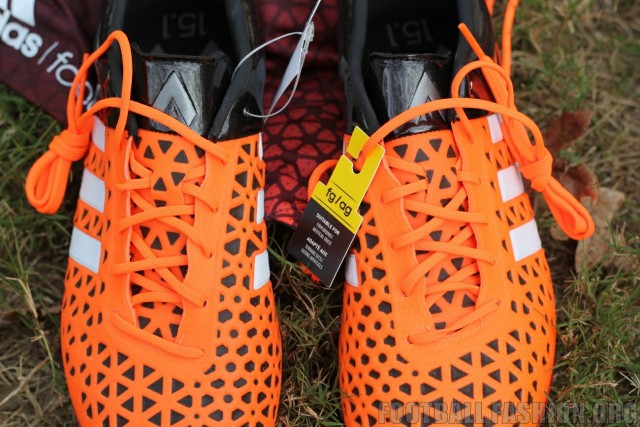 adidas’ designers are definitely on to something with the new soleplate and raised upper on the back of the Ace 15.1. This is because the stability of the boot has proven to be excellent on dry natural and artificial grass surfaces. The Ace 15.1 even worked relatively well on a wet natural surface and prevented me from slipping while running, passing and shooting in a wet weather small-sided game.

The relatively high rear upper of the adidas Ace 15.1 takes a little getting used to because it touches the leg in an area than most players are not used to having an upper reach. However, it works with the heel counter and soleplate to provide very good support by keeping the foot in place while trapping, passing and shooting.

As a heritage boot fan (think Nike Tiempo, PUMA King and Umbro Speciali) I was apprehensive at first about adidas’ Control Web in the touch department. My concerns were quelled for the most part after about half an hour of wearing the Ace 15.1. A summary of my touch thoughts of the adidas Ace 15.1 are below:

Trapping – Quite good! The curve of the instep of the matches the shape of the foot to a tee. This means that it is designed for efficient trapping. The Control Web in this area is more widely spaced out than the rest of the boot but works well to kill the momentum of the ball quickly to provide that extra split session to execute the next move on the pitch.

Long Passing – This took some practice to get used to. At first I failed dismally in passing long, in the air passes with the front of the foot when wearing the adidas Ace 15.1. Mastering them did come in time but took the two hours’ worth of practice sessions that I mentioned.

Shooting – The combination of a good ride, stability and all round touch make shooting with the adidas Ace 15.1 almost second nature. Because of the unique nature of the Control Web I did find myself having to adjust the shoe a bit to figure out the right weight to put on the ball when shooting.

The adidas Ace 15.1 is a low maintenance boot as long as you play with it on dry natural or artificial surfaces. It does pick up quite a bit of dirt on its bottom and within its webbing on natural wet fields. The only way that I could figure out to quickly clean it in when it gets dirty is to spray it with a jet of water from a hose and let it dry.

The protection towards the back of the adidas ACE 15.1 is good because of the raised and padded upper at its rear. It is less towards the front where the Control Web will absorb some of the pressure from stamps by other cleated players. However, this is less than you’d find in similar boots from PUMA and Umbro. The tongue of the boot is relatively thick and does offer good protection for the top of the foot. 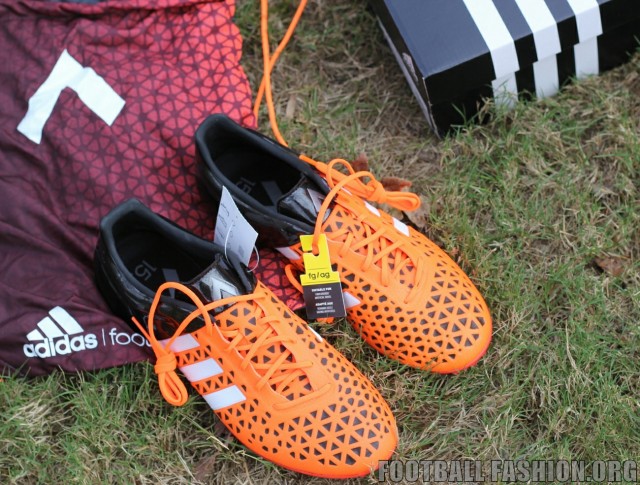 The first in adidas’ new silo of control boots, the Ace 15.1 is a solid all round soccer boot that has the advantage of being specifically designed for use on both natural grass and increasingly common artificial grass surfaces. This fact alone makes it worth looking at if you’re in the market for new cleats this Christmas season. Throw in its stability and touch another couple of reasons that to look at it.