Mexican Apertura 2010 champions Club Santos Laguna have become the first Primera División de México team to launch their 2011/12 kits. The club did so in front of over 1,500 fans at its Estadio TSM on Wednesday night when it unveiled its home (white and green) and away (black and green) PUMA kits for the Mexican Torneos de Clausura and Apertura 2011 (the two separate seasons comprising the Mexican Primera calendar).

Both  of Los Guerreros (The Warriors) 2011 kits use PUMA’s PowerCat 1.10 designs. Soccer jersey fans may recognize from the Italy Puma 2010/12 and Uruguay Puma 2010/12 home kits worn during the 2010 FIFA World Cup. Here’s a detailed look at the Santos Laguna PUMA 2011 home and away kits. They will be available to club fans in January at the World Soccer Shop Santos Laguna Store. 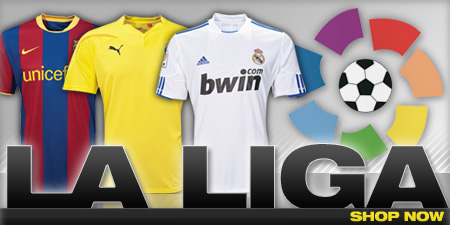