New Balance and La Federación Panameña de Fútbol have unveiled the home and away kits that will be worn by Panama during the final round of regional qualification for 2018 FIFA World Cup Russia. Both jerseys will be available at World Soccer Shop. 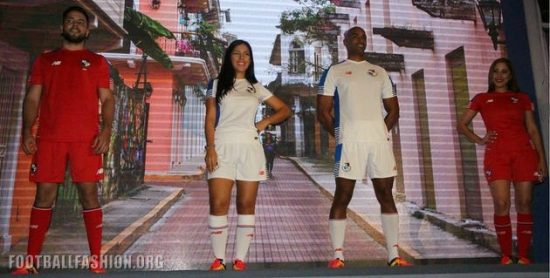 The 2016/17 Canaleros (Canal Men) shirts use a bespoke design from New Balance Panamá featuring a ribbed v-neck. Contrasting color blocks run along the sleeves, shoulders and upper back. Further detailing include eye-catching horizontal stripes on the lower sleeves and lower back area. The text “Panamá” is printed on the signoff area at the back of the kits.

The Panama 2016/17 NB Football home kit is in the team’s traditional red. The white and blue of the Panamanian national flag accent the jersey. The CONCACAF Gold Cup semi-finalists of 2011, 2013 and 2015 will wear a white alternate shirt with mainly blue detailing. Red appears on its middle lower back via a vertical flash. The New Balance logo on the kit is also red.

Panama will debut their 16/17 home kit when they kick off the North, Central America and Caribbean hexagonal phase of 2018 World Cup qualifiers at Honduras on November 11.