With 48 Primera División titles to their credit, Club Atlético Peñarol are Uruguay’s most successful football team.

The Aurinegros (Gold and Blacks) recently released a limited edition kit from longtime sponsor PUMA in celebration f their 125th Anniversary. It was worn (probably as a one-off) during Sunday’s 1-0 away loss at Juventud.

The Peñarol 125th Anniversary jersey departs from the club’s familiar gold and black vertical stripes in favor of gold and black halves inspired by the shirt’s worn by the team from 1891 to 1911. The polo collared shirt includes an Asociación Uruguaya de Fútbol champions patch on its midchest in recognition of Peñarol’s 2015/16 league championship. A classic CA Peñarol crest is printed on the right breast. The year of the club’s founding, 1891, is printed on the kit’s signoff area in a stylized font. 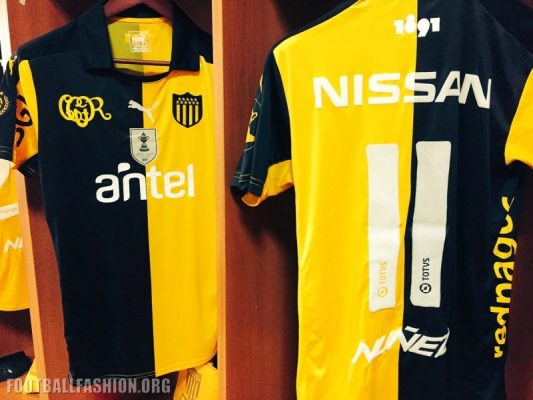