Avaí Futebol Clube recently revealed their 2016 home and away kits from Fila. They will feature during the team’s upcoming Campeonato Brasileiro Série A and Copa do Brasil seasons.

One of only a handful of professional soccer clubs wearing Fila nowadays, Avaí FC ‘s 2016 home jersey is in their usual sky blue and white vertical stripes. It has a white modern v-neck collar with a sly blue insert. The shirt’s sleeves a sky blue with a white band towards its bottom that leads to a section featuring white pinstripes with thetext “AFC” on them.

The mainly white 2016 Avaí away kit has a similar effect on ts sleeves. It also has a v-neck collar but with no insert. A series of light blue horizontal pinstripes add detail to the front and back of the jersey.

The Avaí FC 2016 Fila home and away shirt both have a lion printed on their upper backs. It is inspired by the team nickname of “Leão da Ilha” (Lion of the Island). “Paixão Pra Toda Vida”  (Passion for Life) appears below the lion. 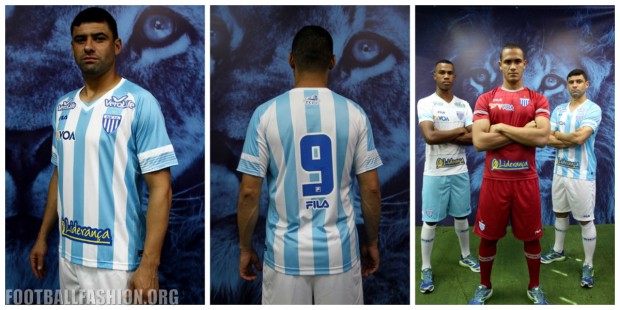