The Real Madrid adidas 2011/12 home kit has been officially launched. It is now available at the World Soccer Shop Real Madrid store.

Here’s a detailed look at the new kit of the 2010/11 Copa del Rey champions, second place Spanish La Liga finishers and UEFA Champions League semi-finalists. Some of the pictures from the Real Madrid Shop in Madrid, Spain show what appears to be the yet to be launched Real Madrid 2011/12 away jersey.

The new Real Madrid kit stands out for its sleek and sober design. Gold is the chosen colour for the details, including the adidas logo and the three stripes; a brand new feature which represents the many successes of the most laureate club in the history of Football.

For the first time since its foundation, the club has decided to include gold in the design of its uniforms.

Players’ names and numbers will be golden too, matching the details on the jersey. The badge has an innovative 3-D design, which reduces the weight of the garment, giving it an added feature. This jersey gets back to the classic polo collar, which carries the initials of the club on the reverse side.

Shorts and socks have the same classic lines as the jersey and include the initials of the club:”RM”.This jersey features adidas’ exclusive Climacoolâ„¢ Technology which ensures body temperature control and ventilation, thanks to the use of technically advanced fabrics. 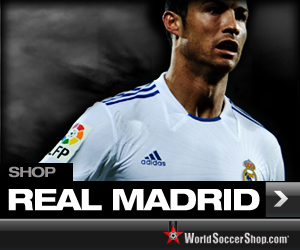