PUMA has followed last year’s groundbreaking evoPOWER 1 with the release of their latest power boot – the evoPOWER 1.2. One of our boot testers has been testing the new soccer shoe over the past month. Read on to find out what he thought of it.

Where to Buy It

The PUMA evoPOWER 1.2 is now available for sale in several colorways and in Firm Ground and Soft Ground versions at World Soccer Shop and Kitbag. 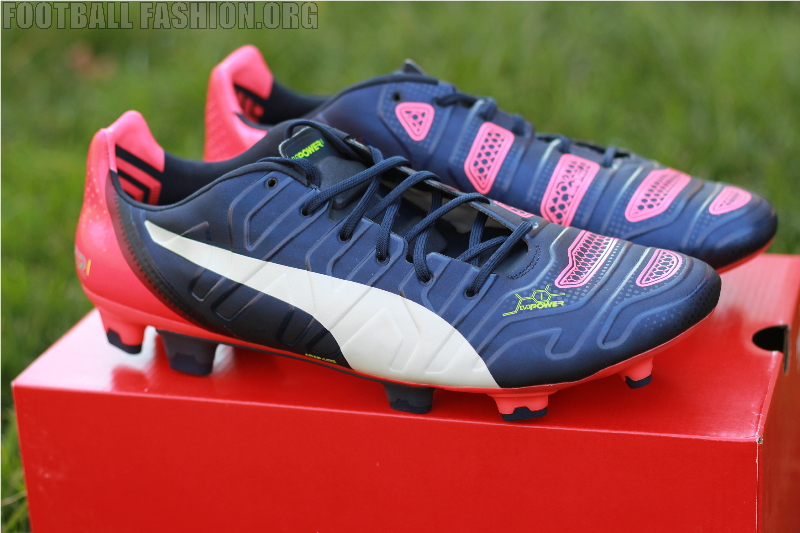 Before I delve into my experience with the evoPOWER 1.2 here is some technical information from PUMA on the boot. I’ll allude to some of the mentioned features throughout the course of my review.

Like its predecessor, the new evoPOWER 1.2 FG is inspired from the power generated through a barefoot kick.  The boot’s lightweight and super soft microfiber Adaptlite upper material stretches in a longitudinal not lateral direction allowing a freedom of movement while maintaining support.  Combined with the Gradual Stability Frame (GSF) outsole technology, the foot bends with a kinetic motion similar to a barefoot to help a player create increased power, especially when shooting.

Accuracy is further improved with the GripTex print that runs across the full length of the upper. The print enhances the grip of the ball in both wet and dry conditions, giving players increased control.  Added precision is created through the lightweight AccuFoam lining that combines with the upper material to provide a clean kicking surface, which helps to increase accuracy when passing and shooting using different areas of the boot. 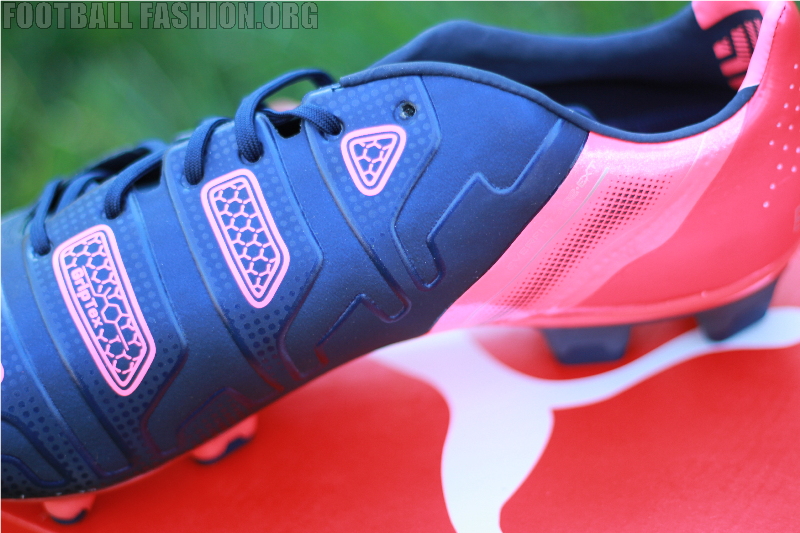 If you had seen the PUMA evoPOWER 1 in person or on the feet of professionals such as Balotelli and Giroud then you’d quickly be able to discern that the evoPOWER 1.2 is an update to the boot. The general (and unique) shape of the boot remains the same along with several key elements of it such as its soleplate and lacing system. The biggest change is the more raised AccuFoam inserts on the front of the shoe. They are can be clearly distinguished in the update to the boot and have clear gaps between them this year. The inserts become key to the boot’s stunning look thanks to a modern print being applied to each towards the front of the shoe. The print is in a brilliant bright peacoat that is also used for the soleplate and heel counter of the boot. I consider the latter to be absolutely brilliant as it can give you a psychological advantage over an opponent when he clearly sees the back of your boots after you either fly by him on offense or strip him of the ball on defense.

The overall look of the PUMA evoPOWER 1.2 is one hundred percent modern and absolutely stunning. It’s certainly the type of boot that you hold in your hands and gawk at for a while before putting them into action. 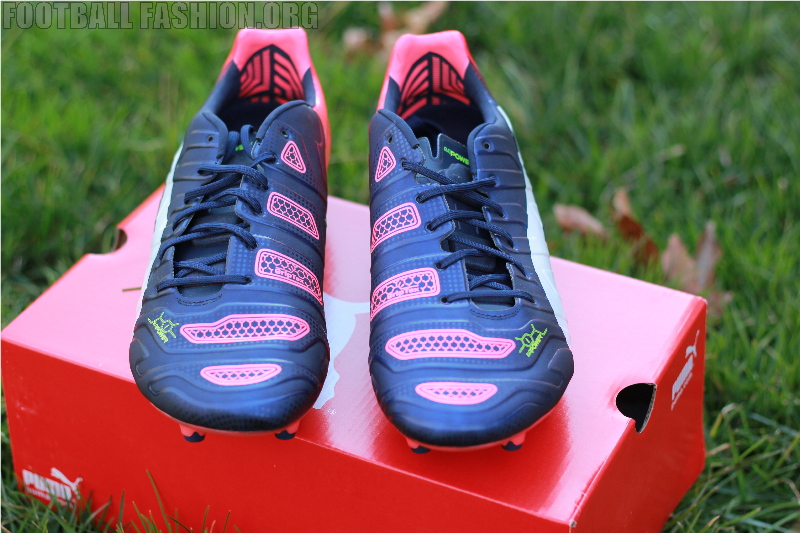 I’ve got what I call average feet. By this I mean that I’ve got average width with feet that can be accommodated by unspecialized shoes. I wear men’s size 10 and that works well on my feet across all brands.

The fit of the PUMA evoPOWER 1.2 can best be described as dreamlike. From the first time I put them on my feet felt at home in them. The fit of the 1.2 is near sock like thanks to its ultramodern synthetic leather upper coupled with excellent padding on the inside of the upper. I was awestruck by the feel of the despite being a veteran wearer of many boots. The new evoPOWER provides such a comfortable fit that I felt like I could wear them all day. Drop the cleats on them and you’d have a fantastic all round athletic shoe for the gym and track with absolutely no unwanted pressure points.

The fit of the PUMA evoPOWER 1.2 is very much true to size. Therefore I recommend either getting them in your usual shoe size. You’ll be fine going half a size down if you’re like me and prefer a snug boot fit that stretches out a bit upon match wear. Like the evoPOWER 1, it’s also on the wide side. If you’ve got narrow feet then try it out in person to determine what size you should get it in.

One fit-related item of the evoPOWER 1.2 that I will point out is the fact that you’ve got to loosen up the top two rows of laces to slip your feet into them. This is typical of most modern boots though a hassle at times. I didn’t mind the tinkering given that the tongue and lacing system of the boot fit very close to the foot to enhance ball touch and foot stability. More on both next. 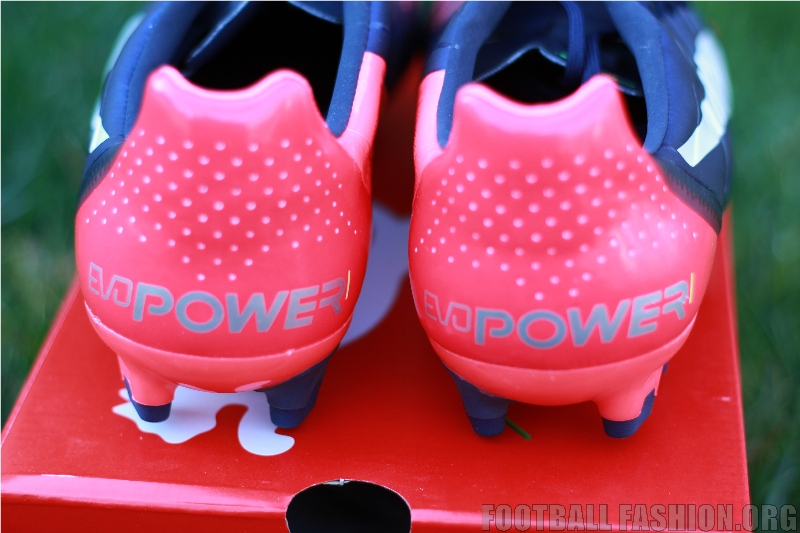 The PUMA evoPOWER 1.2 provides improved stability over the evoPOWER 1.

The soleplate that worked so well with the evoPOWER 1 has been given a second runout for 2015. It has the same stud configuration made up of a combination of blades and conical cleats. The blades provide great stability when making cuts and striking the ball (particularly for shots and crosses) while the rounded studs allow for a great deal of agility when running or performing any move involving the ball of the feet. Most importantly, they do not cling to the ground at all on neither turf nor natural surfaces.

The stability of the evoPOWER 1.2 is enhanced by the protruded, exoskeletal pods if the boot. The added thickness that they provide adds to the boot’s stability since your feet are now less likely to slip within its confines when making sudden changes in direction during matches.

The final stability improvement of the PUMA evoPOWER 1.2 is the higher heel counter than the evoPOWER 1. The added height keeps the back of your foot in place better than moves boots. However, the added upper material collapsible so as to avoid stiffness and unwanted digging or other discomfort in the Achilles area. 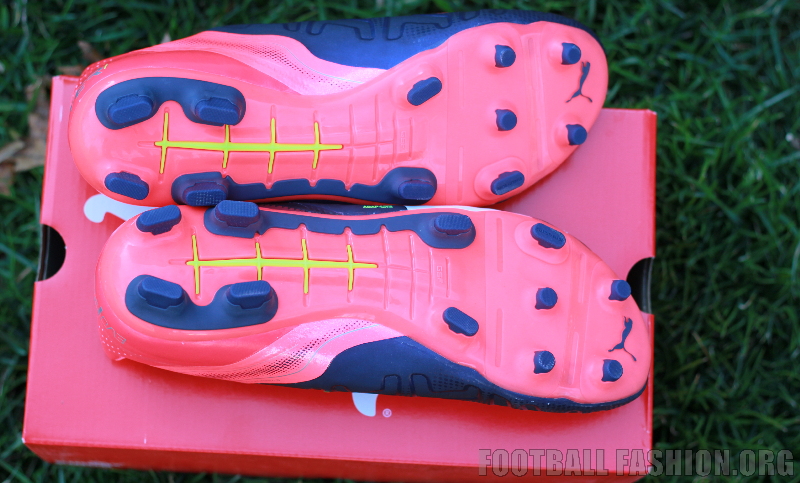 The PUMA evoPOWER 1.2 introduces a new generation of PUMA’s extremely stretchable Adaptlite material in its upper. While the feel of this synthetic is not as good as K-leather, it combines well with the other elements of the upper to provide a high level of intimacy with the ball.

The most important of these is the AccuFoam of the evoPOWER 1.2 now being located on inside of foot forming a honeycomb-like mesh. This is the key to both the boot’s increased padding that is very soft and form-fitting on the feet. The result is an upper that sits close to the foot for excellent feel of the ball. This is particularly felt when trapping the ball or making on the ground passes with the inside if the foot. There is definitely an accuracy improvement in both cases compared to just about every other boot I’ve tested. 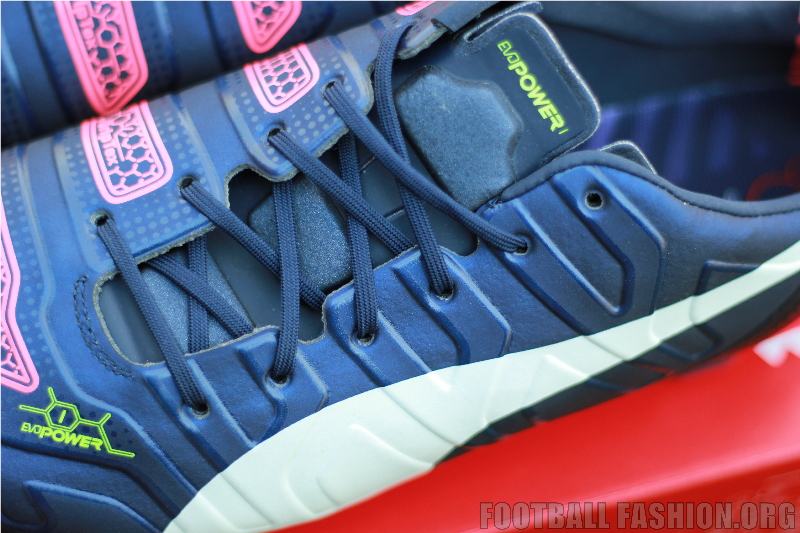 The PUMA evoPOWER 1.2 is quite flat towards its front with a low toe box that really allows you to get your foot under the ball when striking it. This creates very solid contact that is made even better because of the shoe’s bidirectional bending ability. I feel like I can practice shooting and volleys all day long in these!

The evoPOWER 1.2 now has an upper that includes a series of minute studs called GripTex by PUMA. The upper also has more of a matte finish than the previous evoPOWER. Introduced in the evoSPEED 1.2, the GripTex does create a bit of friction between the foot and the ball for better control. The grip improvement is nominal but after wearing other boots with synthetic uppers off late, I can attest that it is present and much welcome in wet conditions. 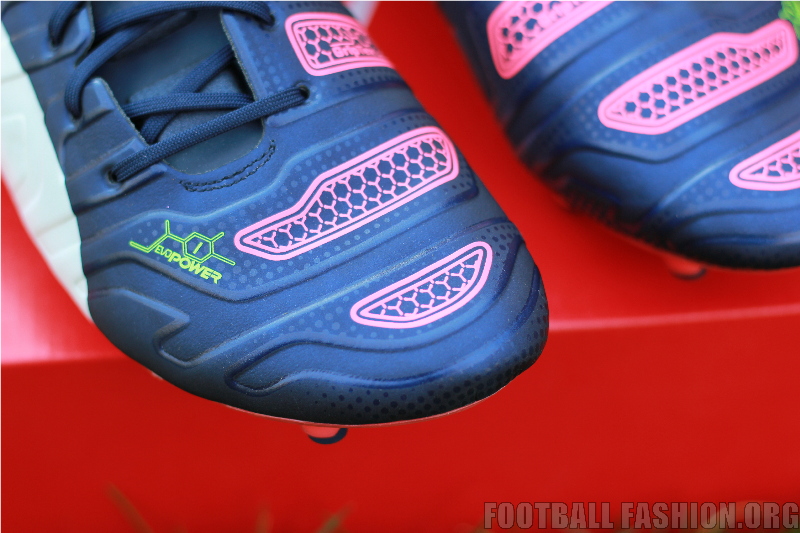 Needless to say, the increased volume of AccuFoam on the upper of the PUMA evoPOWER 1.2 has added to the foot protection that it provides. A major addition in this area is the inclusion of three AccuFoam pods on the tongue of the boot that provides protection from the unavoidable stamps that we receive on the top of the foot during soccer. The higher heel counter that I mentioned previously also adds some protection for the Achilles from studs that may land toward the lower leg area.

PUMA has done a remarkable job over the course of the last year in developing a stellar successor to the evoPOWER! If the exploits of the in-form Olivier Giroud have got you thinking about this boot that consider what we’ve found – great looks, an amazing fit, excellent touch and enhanced stability. All of these make the PUMA evoPOWER 1.2 definitely worth considering when looking for your Spring 2015 soccer boots. 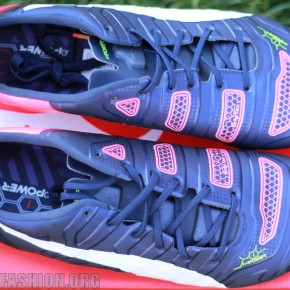