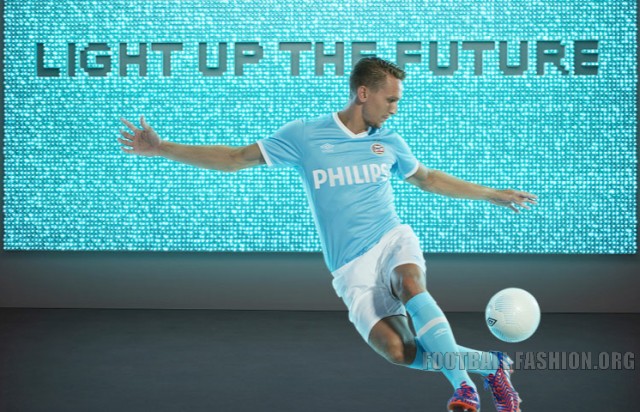 The new shirt will see continental action starting in September when PSV faces Manchester United, CSKA Moscow and Wolfsburg in the group stage of the UEFA Champions League.

According to Umbro: The new PSV Eindhoven 2015/16 Europe kit is inspired by the kits worn by the club in their famous 1988 European Cup win, with a diagonal matt and shine jacquard design across the body of the shirt.

PSV have a history of wearing blue in their European campaigns, and so we’ve given them a contemporary ‘bluefish’ colour for this season’s games as they look to ‘Light Up The Future’.

The shirt also features a crossover v-neck rib collar in white, while on the back neck area the club’s motto is proudly displayed – ‘Eendracht Maakt Macht’, which translates as Strength In Unity. Mesh panels under the arms provide ventilation, while a shaped dropped hem gives the shirt a smart fit. Above the club crest, two gold stars represent the 22 league titles PSV have won throughout their illustrious career.

Accompanying the shirt, white shorts with bluefish side panels are designed for optimum fit, while ergonomically fitting socks are blue with the Umbro logo and ‘PSV’ lettering in white. 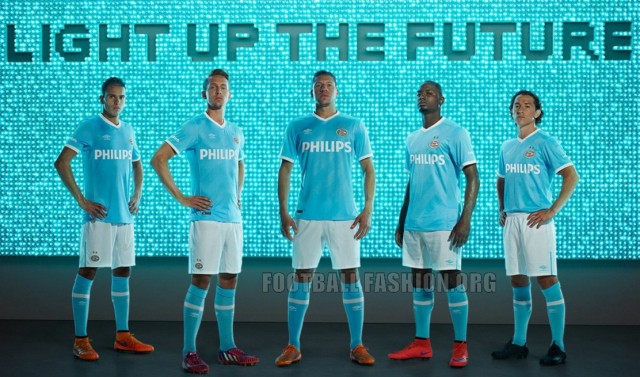 Now in the first year of their kit deal with Umbro, PSV Eindhoven released their 15/16 home and away jerseys in June. Their new European jersey will act as a third kit for their domestic season. All three kits will be on sale at World Soccer Shop, Kitbag, Subside Sports and UK Soccer Shop.