The oldest professional football club in the Netherlands, Sparta Rotterdam will return to the Dutch Eredivisie for the 2016/17 after a six year absence.

De Kasteelheren (The Castle Lords) will wear kits from local firm Robey Sportswear next season. They were revealed at the Sparta website earlier in the week.

The Sparta Rotterdam 2016/17 Robey home shirt is in the traditional red and white stripes of the team whose academy has produced Netherlands internationals such as Danny Blind, Winston Bogarde and Memphis Depay. The new away jersey is green with a several blocks of white stripes on its front and sleeves.

Both carry a classic look thanks to a three buttoned polo collar / placket combination. The Sparta Rotterdam 16/17 home uniform has black shorts while the away strip uses white shorts. 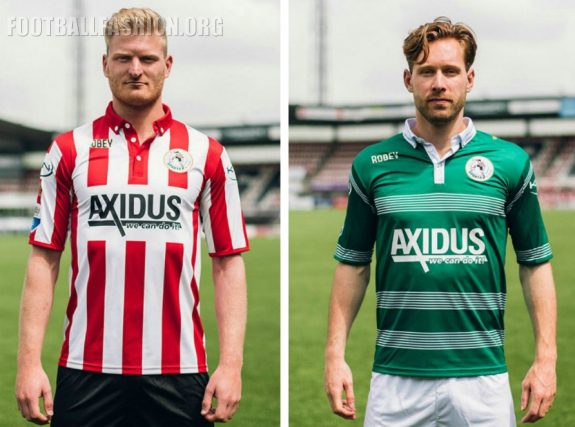