[digg=http://digg.com/soccer/Relaunched_Gremio_1995_Puma_Copa_Libertadores_Kit_Camisa]Grêmio Foot-Ball Porto Alegrense, most commonly referred to as simply Grêmio, is a Brazilian professional football team based in Porto Alegre, Rio Grande do Sul. They finished in 7th place in the recently concluded 2009 Campeonato Brasileiro Série A.

In recognition of their 1995 Copa Libertadores winning season, Gremio and kit provider Puma have launched a special edition shirt featuring the design of that worn by the 1995 squad. Of note, is that the 1995 Gremio Copa Libertadores kit was made by sportswear provider Penalty.

Here are the Gremio 2009/10 Puma home and away Copa Libertadores kits. 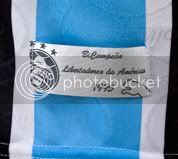