Yesterday, Charlton Athletic launched their 2009/10 Joma away kit for their first season back in the third tier of English football for some time. According to their website:

The away kit, which features black shorts and black socks with a blue band around the top, is reminiscent of the seahawk and blue denim away kit that the Addicks wore two seasons ago. 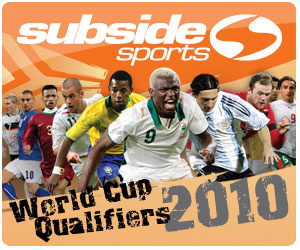