[digg=http://digg.com/soccer/Fiorentina_Lotto_2009_10_Home_Away_and_Third_Kits_Maglie]ACF Fiorentina, commonly referred to as simply Fiorentina or La Viola, is a professional Italian football club from Florence, Tuscany. Founded by a merger in 1926, Fiorentina have played at the top level of Italian football for the majority of their existence. After climbing back up the Italian football system in the early 2000s from Serie C, Fiorentina placed 4th in the 2008/09 Serie A and thus are into the final qualification round of the 2009/10 UEFA Champions League.

Last night, Fiorentina and kit provider Lotto have presented the club’s home, away and third strips for the 2009/10 season. The purple home strip was worn for the first time last night during the club ‘s 0-3 pre-season friendly loss to Paris-St. Germain.

Click on any of the images below to see larger versions of them. 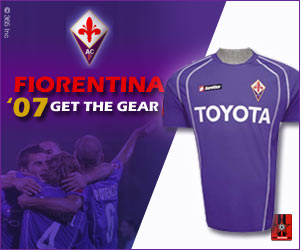