[digg=http://digg.com/soccer/Italy_Puma_2009_Confederations_Cup_Kit_Jersey_Maglia]Puma and the Italy national team have officially launched the Azzuri’s kit for the 2009 FIFA Confederations Cup. As rumoured, the new outfield player kit features a light blue colour not seen for quite some time. According to an Italian newspaper, the colour is meant to celebrate Italy’s FIFA World Cup victories of 1934 and 1938.

The new Italia kit also features the word Italia repeated across its body. The Italian national colours are featured in a striped design along the right side of the new kit’s shirt and the left side of its shorts. It is expected that this Italy kit will also be used for the Azzuri’s remaining FIFA World Cup 2010 qualifying matches. 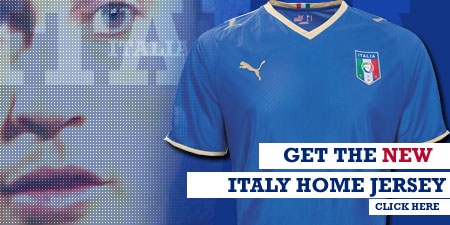